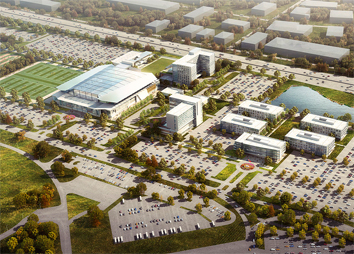 In a remarkable about-face, the Indianapolis International Airport board has cancelled a proposal to build a $500 million medical center and sports complex on 130 acres of unused land.

In a unanimous vote that followed a closed-door executive session Friday morning, the board rejected all proposals for the land and said it would start over.

“We will leave our options open and continue to search for the optimal project that will provide significant benefits to Central Indiana and especially the west side of Indianapolis,” the board said in a written statement.

The decision is a blow to Athlete’s Business Network, a startup real-estate developer, that had proposed building a massive center, with four medical office buildings, a brain health research center, two hotels and a 20,000 seat stadium.

The company came under criticism for having never built a real estate project and for not providing clear signs it could finance or manage such a huge project.

The board had been under enormous pressure from community leaders, including the administration of Mayor Joseph Hogsett, to reconsider the proposal.

Hogsett’s office held several talks with board members in recent days. Board Chairman Kelly Flynn emailed other board members on Tuesday, telling them the deal was losing support.

“In conversations with the mayor’s office, it has become clear that in order for us to be successful in putting this land back on the tax rolls, we need to take a step back,” the email said.

And some health executives, including the leaders of Indiana University Health, the state’s largest hospital system, and the IU School of Medicine, the nation’s largest medical school, publicly questioned the seriousness of the proposal to build a massive medical center.

The airport board seemed to have little choice but to change course.

“The airport has been listening to the community’s input and will always put our community first, so the IAA has cancelled the request for proposals for the 130 acres at the former airport site,” the board’s statement said.

It continued: “We will also continue to engage and gather feedback from our stakeholders, including the City of Indianapolis, our neighboring communities and others.”

IBJ raised questions in several articles about the credentials of ABN's management team. Company CEO Craig Sanders is a former part-owner of a Dunkin’ Donuts franchise that struggled, lost millions of dollars and filed for bankruptcy. Sanders later filed for personal bankruptcy to protect his assets but said he subsequently settled with creditors and withdrew the petition.

Airport board members left quickly after Friday's meeting and could not be immediately reached for further comment.

ABN officials could not be reached immediately for comment.

“Today’s decision presents an opportunity for a true community conversation focused not just on how to return this property to the tax rolls, but also on how to best return it to the people of the west side," said mayoral spokesman Taylor Schaffer in a written statement after the decision. "City leaders will continue to work with the Airport Authority to encourage a selection process that engages all local stakeholders in this important discussion.”

The airport’s decision was a swift and stunning defeat for ABN. Just a month ago, on Feb. 16, the company rolled out its ambitious proposal to the public. It said the project would result in 3,000 jobs for physicians, nurses, technicians, researchers, administrators and support staff.

On easels, the company showed huge renderings of the proposed medical center, with ponds, decorative trees, walkways and grassy areas.

Several airport board members praised the plan at the rollout meeting for its boldness. They said it could help transform the struggling neighborhood. The board scheduled a vote for three days later to approve a letter-of-intent with the company.

But almost immediately, questions arose over whether ABN could pull off such an ambitious plan. An IBJ story revealed that the project’s “chief medical officer” was a chiropractor and that the head of its “substance abuse unit” did not have an Indiana license in addiction therapy, nor any certifications recognized by the state.

The company, founded in 2009, was not registered to do business in Indiana, after failing to submit required paperwork. The Secretary of State’s office administratively dissolved the company last year, something ABN officials later said they were trying to fix.

In a push to try to save the project, ABN officials visited the IBJ and the Indianapolis Star two weeks ago to outline the project’s highlights. They said the risk to the city would be small, because the company would have to prove it had lined up financial commitments within several months, or surrender a large fee to the airport.

But in the weeks afterward, the company canceled a public meeting in Wayne Township, just east of the airport that was intended to explain the project and answer questions. Airport officials cancelled a presentation to the City-County Council. The board also pulled a motion off its agenda twice within four weeks to sign a letter of intent with ABN.

Now, the airport is starting over from scratch.