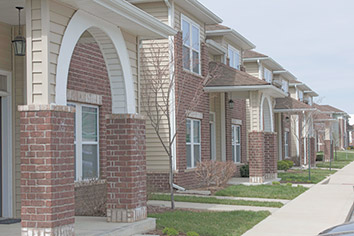 For the fifth consecutive year, Hamilton County has been shut out of federal tax credits for affordable housing projects, while surrounding counties have repeatedly had success in the highly competitive program.

The Indiana Housing and Community Development Authority annually distributes the federal low-income housing tax credits, and this year 18 recipients were awarded a total of $14.3 million.

The two most recent projects submitted by Hamilton County narrowly missed the cut-off, joining 34 others in being denied funding. The 54 proposals submitted statewide had requested a total of $42.4 million.

The Hamilton County projects are now in jeopardy. And although the county is the most prosperous in the state, affordable housing proponents argue the tax credits are desperately needed to add to the area’s scarce low-income housing stock.

Only 14 affordable units were added in the county last year, even though a total of 4,100 housing units were built, according to Noblesville-based not-for-profit Hamilton County Area Neighborhood Development.

And while the county’s median household income topped $89,800 in 2014—one of the highest in the nation—one quarter of all households earn less than $50,000.

That’s important because rates for affordable housing units are based on the area’s median income—typically, tenants must earn less than 60 percent of that amount—which would be about $50,000 in Hamilton County.

Still, Hamilton County hasn’t been successful with securing the tax credits since 2011, even though five different projects have been proposed in that time frame, including the two this year.

Nearly all the counties surrounding Indianapolis have received funding for a project from 2012-2016. The two exceptions are Hancock and Johnson counties, but Hancock had only one application in that time frame and Johnson had none.

The two recent developments proposed by HAND included a $12.5 million plan to redevelop the old grain elevator site near downtown Noblesville and a $7.3 million project to revitalize the historic Adams Township School in Sheridan.

The Noblesville project, known as the Noblesville Granary, would have included 54 one- and two-bedroom apartments, a business incubator and 4,000 square feet of commercial and retail space.

The Sheridan proposal, known as Blackhawk Commons, would have transformed the vacant school building into 30 apartments and preserved the gymnasium as public recreation space.

Both projects are unlikely to become reality now, following the fate of most other unfunded tax credit projects.

“People would have been clamoring to get into the units,” Noblesville City Council President Greg O’Connor said. “We’re going to have to have more availability.”

One point can make a big difference in the scoring system for the tax credits, which is outlined in the state’s Qualified Allocation Plan, or QAP.

Points are awarded based on project aspects like estimated rents, amenities and the applicant’s financing structure. For example, a project can earn points for including a playground or walk-in closets. Another factor is location—how close is the project to services like day care or a pharmacy?

The QAP, which is updated every two years, includes almost 40 pages of scoring factors.

The Indiana Housing and Community Development Authority staff reviews and scores the applications, then makes recommendations to the authority’s board, which makes the final decision.

Rental Housing Tax Credit Manager Alan Rakowski said the state looks for proposals geared toward helping the most vulnerable and promoting self-sufficiency in communities where people want to live and work.

In the past five years or so, Rakowski said, the QAP has favored projects reusing existing structures, like abandoned buildings.

“We tried to encourage reinvesting into communities, especially downtown areas,” he said.

HAND’s projects were both denied for their scores, despite appearing to match the state’s preferences and tallying more points than several others that were awarded tax credits.

The overall highest-scoring proposals aren’t necessarily the ones selected, Rakowski said, because the applications are divided into “set asides” like small-city or elderly. Projects compete within those categories

“It all comes down to the set-aside they’re competing in,” he said.

“Overall, I think Hamilton County is right there with being competitive.”

The Noblesville Granary was in the small-city set-aside, while Blackhawk Commons was in the rural category. The Noblesville project was within three-fourths of a point from beating out a senior-housing project by Fishers-based RealAmerica Development LLC in Hobart.

“I’d like to think that Noblesville could have beat out Hobart,” said Nate Lichti, HAND executive director. “It’s a very tricky system.”

But while the county hasn’t seen support from the tax credit program since 2011—when senior-housing development Spicewood Gardens in Sheridan received $433,000 to add 26 units—it was far more successful in earlier years.

From 2003-2010, projects in Hamilton County were funded every year except for 2006 and 2007, when no proposals were submitted. The tax credits have supported Deer Chase Apartments, Noble Manor Village and Meredith Meadows, all in Noblesville; Hamilton Place in Arcadia; and Commons at Spring Mill in Westfield.

If a project doesn’t receive the federal tax credits, a developer can re-evaluate the proposal and reapply later, but often, the project dies.

In 2012, Chillicothe, Ohio-based not-for-profit Frontier Community Services applied for an 85-unit complex called Parkside Senior Residence in Fishers, but the organization dropped the proposal after being denied tax credits.

“You can’t afford to build them without the tax credits,” said Rod Siddons, chief development officer for Frontier.

The development would have been a $14 million investment, and Frontier had requested $1.4 million in tax credits.

In 2013, Carmel-based Herman & Kittle Properties Inc. proposed a 124-unit apartment complex for seniors called Meridian Flats in Carmel, but the $16.1 million project did not receive the $1.4 million the multifamily housing developer requested.

The following year, Herman & Kittle returned with the same development but scaled it back because of changes in available land, according to Vice President of Development Midwest Erika Scott. The revised apartment complex would have been only 40 units, with a price tag of $6.4 million. Herman & Kittle requested $561,300 million in tax credits, but once again, the proposal was not selected.

“A large part of the financing of Meridian Flats was dependent on being awarded a tax credit allocation from the state, and once we found out that we did not receive this allocation we chose not to move forward,” Scott said in an email.

Lichti said HAND would like to reapply for both its projects next year and hopes to be more competitive by securing additional local support, reducing the cost per unit, and diversifying the development team—all steps that could earn more points in the scoring process.

But the not-for-profit has lost the option to purchase both properties.

The owners “opted not to extend our agreement at this point,” Lichti said.

O’Connor said he’d still like to see the Noblesville Granary move forward, but it comes down to identifying funding sources.

“The challenge is, how do you get the capital to make these projects economically viable?” O’Connor said. “The developer looks at it and says, ‘Well, these numbers don’t work.’”

The federal tax credits are based on a state’s population. Indiana received about $15 million this year.

“There’s more of a demand than there is supply,” Rakowski said. “If we had twice as many credits, we’d probably do twice as many deals.”

O’Connor agreed the need for more federal help is pressing.

“That conversation has gotta be had at a higher level,” he said.

Lichti is cautiously optimistic for the future, saying the not-for-profit gained more support this year than any previous year.

“We do have backers, and they’re people we didn’t know a year ago,” he said.

But a negative attitude toward affordable housing lingers in Hamilton County communities.

“People see it and their perception is, you’ve got low-income, you’ve got crime,” O’Connor said. “I think that’s really a perception that needs to be changed.”

Lichti and the staff at HAND hope to do just that. The not-for-profit is in the process of creating a housing advisory council consisting of local government and business leaders that would identify ways the community could diversify the housing stock and set benchmarks.

HAND is also launching a campaign using stickers and decals to raise awareness. The initiative is expected to be introduced at the not-for-profit’s annual meeting in May.

“By getting those supporters and starting to see those window decals, we hope that we can start to show we have support in places you might not expect,” Lichti said. “That’s a long-term game.”•