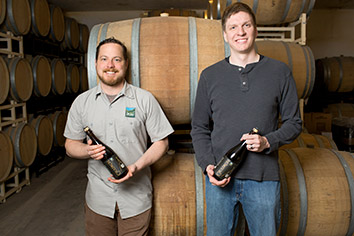 An Indiana University professor with a background working with yeast and a taste for suds has helped local craft brewers overcome a serious chemistry challenge that threatened to derail one of the fastest-growing product lines for beer makers statewide.

Matthew Bochman, who spends most of his time working with DNA in an effort to find new ways to fight cancer, has come up with a cure for “terminal acid shock,” which affects small and midsize commercial breweries making the increasingly popular Belgium-type beers known as sours.

The solution was a godsend to Bloomington’s Upland Brewing Co., whose efforts to make a sour beer called Cauldron failed two years in a row due to terminal acid shock, resulting in the loss of 1,600 gallons of beer.

The fateful crossing of paths occurred last spring, when Bochman took students of his newly created 200-level course “Alcohol and the Science of Fermentation” on a field trip to Upland.

Upland executives, fascinated by Bochman’s work with yeast, one of the key ingredients in beer, pulled him aside to ask for help with their Cauldron conundrum.

Normally, brewers simply rehydrate yeast in a sugar-water solution and add it just before bottling. The yeast eats the sugar, creating the carbonation. But Bochman said the “environment in the Cauldron sour beer was too harsh” for much of the yeast to survive. The inhospitable environment came from low pH levels, higher than normal alcohol levels and the chemicals from the oak barrels the brew aged in, he said.

Bochman made what he calls “chicken soup for the yeast soul”—a solution with sugar, bits of protein, and vitamins and protein extracted from healthy yeast. After the yeast was soaked in that solution, it was added to Cauldron—and, for the first time, Upland had carbonation success with this beer.

“We had made a real nice, tasty beer and in the final analysis it failed to carbonate,” Staton said of Upland’s earlier failures. “We had a real technical dilemma we couldn’t solve. Matt’s a real intelligent guy, and the resources he has at IU are a huge help.”

‘We all band together’

Though Upland could have kept the work a trade secret, the brewery instead decided to publish it; it has since appeared in the journal Food Microbiology.

“We know the problem we had is a part of the puzzle for other craft brewers,” said Staton, Upland’s director of sours operation. “We’re all small businesses, and we all band together. That’s one of the coolest things about the craft brew industry. So I wasn’t about to keep this from my beer-brewing brethren. We feel the healthier the entire craft brew industry, the better for all in the industry.”

The decision to go public was fine with Bochman.

“I’m not tenured yet, so I’m in a publish-or-perish mode,” said the 35-year-old. “So getting this work published is good for me and it’s good for Indiana University.”

The breakthrough has been a boon for Upland, which sold out its first production run of Cauldron—1,200 bottles—in about six weeks.

“It pretty much flew out the doors,” Staton said.

Upland’s line of sour beers is now its fastest-growing segment, he said. Sour beer sales are growing so fast for Upland, in fact, that the company is building a facility adjacent to its downtown Bloomington brewpub dedicated to brewing and bottling sour beers. When it’s done, Upland projects that more than 10 percent of its beers will be sour.

Sour beer, which is often aged in barrels and has a flavor more akin to cider or wine, is on the pricey side. A 750-milliliter bottle (25.4 ounces) can cost $25.

Bochman’s efforts to cure terminal acid shock were not his only contribution to Indiana’s craft-brewing community.

After Bochman arrived in Bloomington with his microbiologist wife, Julia, in 2013, he put the word out that he was willing to help brewers with local yeast production.

“My wife and I love craft beer, so I left a message on the [Brewers of Indiana Guild] website that I’d be happy to give back to the people that brought me so much joy,” said Bochman, a Pittsburgh native whose great-grandfather was brewmaster at the Penn Independent Brewing Co.

Caputo responded: “I hear you’re a yeast guy. I’m an idea guy. Let’s get together.”

Ever since Caputo had gotten into commercial brewing six years ago, he’d wanted to make beer from all-Indiana products.

Bochman’s work with Upland reinforced the notion that there was a demand for Indiana-made yeast. Most brewers get their yeast from a handful of large suppliers in California and the Pacific Northwest, Staton said, and shipping costs more than the yeast.

Bochman and Caputo, who formerly worked at local craft brewer Flat 12 Bierwerks, co-founded Wild Pitch Yeast LLC last year and devised a yeast-hunting kit they sell for $20 to home brewers. So far, they’ve distributed it to craft brewers free, but Caputo said the samples are helping them build a yeast bank—which they can sell from later.

“You can find yeast almost anywhere—on a tree, in a garden, on a bee, in your beard,” Bochman said. “Harvesting and producing your own yeast is a way to make your beer hyper-local.”

A $13,000 grant from IU’s Johnson Center for Innovation and Translational Research got the business going, but now Caputo said he and Bochman are at the point of investing their own money.

Justin Miller, owner of Irvington’s Black Acre Brewing Co., also has jumped aboard as a part-owner.

In addition to creating carbonation, yeast shapes the taste of beer in a variety of ways.

“Brewers that have their own yeast from their particular area can have a one-of-a-kind brew,” said Caputo, 51.

But not all yeasts are suitable for beer-making. That’s where Wild Pitch comes in.

The company tests the yeast from submitted kits and for a fee will grow yeast for brewers to use in their beer making. A five-gallon pitch—which would make five gallons of beer—costs $10.

“Ideally, we’d like to see this grow with professional brewers,” Caputo said. “And the farm-to-table movement isn’t limited to Indiana. We think this service could have appeal to brewers in almost every state.”

For brewers who don’t want to hunt their own yeast, Caputo said, “We hope to grow our yeast bank to be able to provide brewers yeast from Florida to Alaska and every place in between.”•