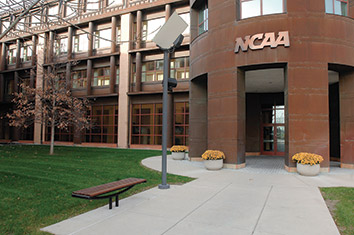 An attorney representing two ex-University of North Carolina athletes says the school and Indianapolis-based NCAA are both responsible for UNC’s long-running academic fraud scandal that he says denied athletes a quality education.

Michael Hausfeld said April 19 in a hearing in federal court that athletes who took even one of the irregular courses had been defrauded. Hausfeld is one of the attorneys representing ex-women’s basketball player Rashanda McCants and ex-football player Devon Ramsay, who filed a lawsuit alleging neither defendant did enough to ensure athletes received a quality education.

“The essence of this lawsuit is not about easy classes or friendly professors,” Hausfeld said. “It’s about academic fraud as opposed to academic integrity.”

The school and NCAA are seeking to have the case dismissed, while UNC is also seeking the dismissal of a related lawsuit filed by two other ex-athletes: football player Michael McAdoo and women’s basketball player Kenya McBee. District Court Judge Loretta C. Biggs heard arguments in both cases that seek class-action status during an all-day court session April 19, asked questions of the attorneys but didn’t immediately issue a ruling.

UNC’s academic case centers on independent study-style courses that required no class time and one or two research papers in the formerly named African and Afro-American Studies, or AFAM, department. Run largely by an office administrator—not a faculty member—the courses featured GPA-boosting grades and significant athlete enrollments across numerous sports, while poor oversight throughout the university allowed them to run unchecked for years.

Both lawsuits—as well as a third by two other ex-UNC athletes and dismissed in state court in February—were filed after a 2014 probe by former U.S. Justice Department official Kenneth Wainstein. That report estimated more than 3,100 students were affected between 1993 and 2011, with athletes making up roughly half the enrollments in problem courses.

During the April 19 hearing, attorneys for UNC and the NCAA argued that the lawsuits should be dismissed because a three-year statute of limitations had passed, while UNC also claimed sovereign immunity as a state institution. The athletes’ attorneys have made similar arguments that their clients were steered into the courses by academic counselors to minimize conflicts with sports practice schedules—sometimes handed a predetermined class schedule despite it conflicting with their desired major pursuits—and no indication that the courses were deficient by lacking faculty involvement.

While Hausfeld argued the NCAA had a duty to ensure the quality of education for “vulnerable adolescents” at member institutions, NCAA attorney Stephen D. Brody argued the organization doesn’t venture into the classroom to monitor the quality or rigor of courses.

“That is not a space that is occupied by the NCAA,” Brody told Biggs.

McCants and Ramsay combined to take three problem AFAM courses while majoring in other departments, according to their lawsuit. In Tuesday’s first hearing, attorneys for McAdoo and McBee said their clients had taken one or two of the irregular courses during each semester in school. McBee graduated with a double major, one coming in the AFAM department, while McAdoo withdrew from school to pursue a professional playing career after being ruled permanently ineligible for academic violations in 2010.

Geraldine Sumter, an attorney for McAdoo and McBee, compared the problem courses to “an empty shell.”

“This is not a case of educational malpractice,” she said. “This is a case of failing to educate.”

The academic case has led the NCAA to charge UNC with five violations—including a lack of institutional control—in a still-pending investigation. It also led to trouble for UNC with its accreditation agency, which put the school on a year of probation last June.•