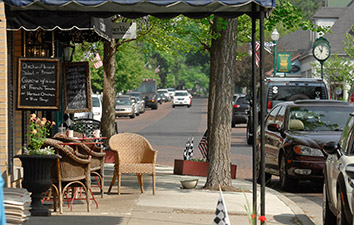 A decade-long struggle by Zionsville to keep a big-box retailer outside the town’s boundaries might be coming to an end, with the Boone County town on the losing end of the battle.

Zionsville has repeatedly denied requests from Wal-Mart Stores Inc. to construct a store on Michigan Road north of 106th Street, but a ruling last month in a lawsuit brought by the giant retailer requires that the municipality grant its approval.

Wal-Mart isn’t saying whether it now will pull the trigger on the store, though observers say it likely will. Michigan Road north of the Marion County border is one of central Indiana’s top retail corridors, and the chain has no store directly serving it.

But the company would likely have to stick with the exact store proposal it made in 2006 to avoid restarting the approval process—which could require reviews by planning and zoning boards.

Bentonville, Arkansas-based Wal-Mart sued the Plan Commission in 2008, charging denial of its 2006 proposal was arbitrary because it wasn’t based on regulations in the town’s zoning ordinances—and even if it had been, the plan complied with all relevant items.

Wal-Mart also suggested that Zionsville “willfully defied” a ruling from a 2006 lawsuit between the parties that found the Plan Commission’s review of the project was overly broad.

Zionsville argued that the Plan Commission’s denial was justified because the project didn’t meet regulations in the town’s zoning and subdivision control ordinances.

In last month’s decision, Special Judge Steve Nation ruled the Plan Commission ignored previous court instructions, and that its reasons for rejecting the request were too vague or did not fall under the town’s jurisdiction.

“There could not be clearer evidence of the Plan Commission’s willful defiance of the ruling in the 2006 case,” Nation wrote.

Nation also said then-Zionsville Planning Director Wayne DeLong might have intentionally given false testimony under oath when discussing zoning documents. But the judge wrote that testimony did not affect the court decision. DeLong could not be reached for comment.

Michael Hicks, director of the Center for Business and Economic Research at Ball State University and the author of a book about Wal-Mart, said the legal battle was unusually drawn-out, even by the standards of Wal-Mart, which is accustomed to receiving pushback from communities where it wants to build.

“My guess is, they’re continuing to fight it simply because they know they’re going to win,” he said. “It’s hard to deny Wal-Mart.”

The dispute kicked off in 2006 when Wal-Mart proposed a 300,000-square-foot shopping center anchored by a Walmart Supercenter for a 22-acre, company-owned site.

The property is along the border of Hamilton and Boone counties, with about 14.5 acres in Zionsville and eight in Carmel.

During Zionsville Plan Commission meetings in 2006, town officials said the building would sit too far off the road to comply with zoning requirements, and they cited concerns with drainage and traffic.

Wal-Mart representatives argued Zionsville had no control over how far the building would be from the road because the entrance to the property would be in Carmel.

In his ruling last month, Nation agreed the frontage is outside Zionsville’s oversight. Even if the town’s zoning did apply, the store’s lot would be considered a “structure” and would comply, the judge wrote. 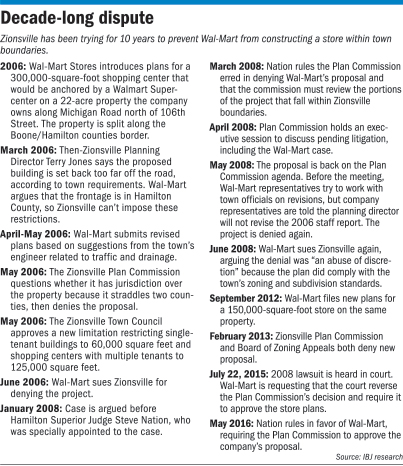 In May 2006, Zionsville denied Wal-Mart’s development request, a move that fortified the town’s reputation as being particular with development.

That same month, the Zionsville Town Council enacted regulations for the Michigan Road corridor that limited single-tenant buildings to 60,000 square feet and shopping centers with multiple tenants to 125,000 square feet. The move effectively prevented any big-box store from moving to the community, which takes pride in its quaint, small-town atmosphere.

Town officials said at the time the restriction would provide a transition between retail developments to the south and residential neighborhoods to the north. The limitation remains in place.

In June 2006, Wal-Mart filed its first suit against the town. Less than two years later, the court ruled in favor of the retailer—ordering the Plan Commission to review only portions of the project within town limits to determine whether it complied with the municipality’s regulations.

Wal-Mart’s proposal returned to the Plan Commission in May 2008. But Zionsville didn’t update documents with new information submitted by the company, and town officials admitted they didn’t spend much time re-reviewing the matter, according to court documents.

The plan that had been introduced in 2006 was the same one Plan Commission members had before them in 2008, and the request was denied again for what appeared to be the same reasons.

“The factors that convinced me at that time that we should vote this down—the drainage issues, the traffic issues, the crime issues, the aesthetics and others—are still in place,” then-Plan Commission member Allan Rachles said during the 2008 meeting, according to court documents.

Wal-Mart responded with a new lawsuit that described the denial as “an abuse of discretion,” and requested the court mandate approval of the company’s plans.

“The Plan Commission’s decision to deny Wal-Mart’s petitions based on ‘crime’ and ‘aesthetics’ concerns—despite knowing its ordinances did not permit it to do so—and based on 14 issues that Wal-Mart had previously resolved, was arbitrary and capricious and in defiance of the 2008 order,” Nation wrote in his ruling.

The retailer revised its proposal in 2012 in the midst of the lawsuit with new plans showing a 156,000-square-foot store that would include about 3,000 square feet of space for several other tenants, such as a Subway, salon and bank.

At the time, the store was described as more upscale than typical Walmarts.

In February 2013, the Plan Commission and Board of Zoning Appeals denied the company’s requests. 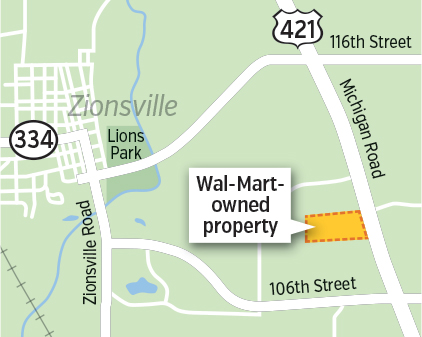 The May court decision applies only to the retailer’s 2006 proposal, though Nation’s ruling would seem to suggest the town is legally vulnerable on the 2012 decisions as well. But if Wal-Mart sticks to its 2006 plan, the new restrictions on building size likely wouldn’t apply.

Wal-Mart was noncommittal about its plans. “We are always looking for ways to best serve our customers in Zionsville and throughout Indiana,” Wal-Mart spokeswoman Anne Hatfield said in a written statement. “It is premature to comment further at this time.”

Business experts say the proposed Zionsville store will be built and will be successful.

“The motivation for keeping Wal-Mart out of your community, I understand that, but it doesn’t work,” said Richard Feinberg, professor of consumer science at Purdue University’s College of Health and Human Sciences. “You can keep Wal-Mart out of a community, but you can’t keep consumers out of Wal-Mart.”

Hicks said Wal-Mart is largely closing are in areas with declining population—the opposite of Hamilton and Boone counties.

“They overbuilt in places,” Hicks said. “So, I think Wal-Mart is very anxious to have new locations in growing places.”

The next-closest Walmart is at West 86th Street and Michigan Road—about three miles from the proposed Zionsville location.

“Wal-Mart will do well, in my opinion,” Feinberg said. “They’re very smart. They know what they’re doing.”

Hicks said a Walmart could siphon business from a nearby Marsh Supermarket, but he doesn’t view it as a threat to downtown shops.

“For a place like Zionsville, Walmart isn’t going to clobber the downtown businesses,” Hicks said. “The downtown Zionsville stuff isn’t competing with Walmart.”•