Home » Pence endorses Holcomb as next GOP nominee for governor 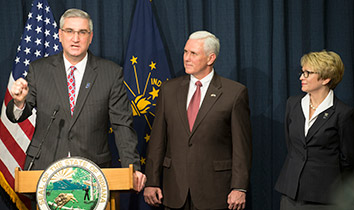 Pence said in a statement Friday that he believes Lt. Gov. Eric Holcomb is "one of the best prepared individuals in recent memory" to be governor.

"Eric will put together a robust campaign utilizing decades of valuable experience in all 92 counties, and I look forward to supporting his efforts in continuing the progress that we all have worked so hard to achieve," Pence said.

Pence withdrew from the gubernatorial race last week after Trump, the billionaire businessman and Republican presidential nominee, plucked him to be his vice president.

That set off a flurry of behind-the-scenes lobbying by some of the state's top elected officials. U.S. Reps. Todd Rokita and Susan Brooks are also considered to be top contenders for the GOP nomination.

Indiana's 22-member Republican Party committee is set to pick a replacement for Pence during a closed-door meeting on Tuesday.

Holcomb is former state party chairman who has worked closely with party leaders for years.

“Eric is at a significant advantage over anyone because he worked on the state committee with most of us,” Jamey Noel, who serves on the 22-member group, told IBJ last week. “We are familiar with him, we know him inside and out, and we can trust Eric.”

"That puts the committee in a little bit of a bind," Helmke said. "If they reject the vice president (nominee's) endorsement that might send a message that there's some disunity going on."

Brooks and Rokita filed paperwork withdrawing from their congressional re-election bids last week. Holcomb, whom Pence appointed as lieutenant governor in March, filed the forms to drop his bid for election to a full term in his new role.

Whoever is passed over by the committee can be restored to the ballot for the positions they withdrew from, though Indiana Republican Party Chairman Jeff Cardwell has cautioned that there are no guarantees.

Holcomb, who has never been elected to office, has touted his eight years as an aide and campaign manager to former Gov. Mitch Daniels and four months as lieutenant governor. Pence picked Holcomb for the post in March after his 2012 running mate, Sue Ellspermann, resigned.

Holcomb praised Pence for the endorsement, but has thus far refused to offer his views on hot button issues, while pledging to continue pursuing a business-friendly agenda first articulated under Daniels.

"I am as honored today to receive Governor Pence's support as I was when answering his call to serve as Lt. Governor," Holcomb said in a statement.

Her advocates argue she is a more electable general election candidate and she has stuck a more moderate tone on divisive social issue that have been a hallmark of Pence's one term in office.

"I am confident I am the strongest candidate to beat John Gregg in the fall, and I will continue my efforts to demonstrate that to the committee," Brooks said.