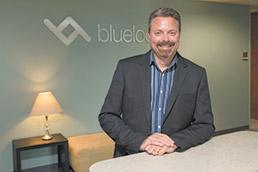 Major company achievements during tenure: Bluelock focuses on disaster recovery—keeping businesses running even if a data center is destroyed or damaged. Bluelock’s work has earned the attention of IT analyst Gartner Inc., which named it a 2016 “Leader in the Disaster Recovery as a Service” category. “The thing I like best,” O’Day added, “is that we’re the little Indiana engine that could. It baffles people.”

Recent tech problem solved: An airline was concerned about availability of its applications during an adverse event like a power outage or attack. “There were applications that managed real-time passenger manifests that had to communicate live with a TSA database,” O’Day said. “If those applications were offline, damaged or unable to communicate to the TSA, no planes could move. We were able to leverage multiple disaster-recovery replication software technologies into a single solution to protect not only this application but the rest of their data center.”

First computer: A Commodore VIC-20, “which required you to type the programs in from a paper magazine. “Having to type the programs in over and over led to a huge epiphany that I could actually change what I was typing in and create different results. At 12 years old, the idea that I had control of what the computer did blew my mind.”

Education: A Brebeuf grad, O’Day enrolled in Purdue’s Computer Technology Program for a few years, “and if they had only advised business and applied technology classes instead of math, math, math, I may have stayed.” He left due to “being terrible at calculus and a lot of impatience to get into the technology business.”

The road to here: After leaving Purdue, O’Day joined a small software company focused on children’s education. “In my mind, the only people who got to work on computers for a living were people with degrees from prestigious schools who worked at IBM. I didn’t know where to start until I figured out that anyone who could write software could sell software—that was the breakthrough.” The firm provided him with experience that helped him get hired in the IT department at St. Vincent Hospital as a night-shift operator in its data center. This began his love of building IT platforms. That led to Eli Lilly and Co., where he used internet and web technology to transform how medicine was developed and consumed in the pharmaceutical industry. “However, something important was missing, and when several friends I had worked with in the past asked me to join them at an internet consulting firm they were starting, though it was scary to leave the comfort of the Fortune 500 world, I took the plunge.”

Go-to websites: “I find news aggregators like Twitter and Google News more valuable than any one particular source of general tech industry information.”

Favorite gadget: His iPhone. “Phone apps are so powerful, I no longer carry my laptop.”

My job would be easier if … “IT and business were more closely aligned. I wish more technologists realized how much opportunity they have to show leadership inside of their businesses and that less of them waited for the business to ask them to get engaged.”•