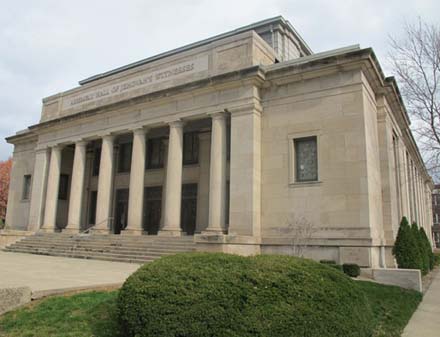 A historic church building at the corner of 12th and Delaware streets has been purchased by a large congregation expanding into the downtown area.

Traders Point Christian Church in Whitestown is spending $2 million to renovate the 35,300-square-foot structure and should have it ready for worship early next year, Rev. James Stanley said.

The neoclassical, limestone building has been used as a place of worship since it was built in 1912 and had been owned by The Jehovah’s Witnesses since 1978.

The location at 1201 N. Delaware St., across from the Benjamin Harrison Presidential Site, will be the third for Traders Point. The congregation turned to downtown following its entrance into Carmel in January and quickly homed in on the Jehovah’s facility.

“We could not believe the pristine, well-maintained condition of the building,” Stanley said. “It was like everyone’s jaw dropped, with a building that old, how well-maintained it had been.”

The building includes a 1,200-seat auditorium renovated in 1995. That’s a little larger than what Traders Point needs. But the church likely will reduce the space somewhat to better fit its plans of hosting multiple services at different times.

Still, the structure’s overall size meets the congregation’s “prototype of what we’re looking for,” Stanley said.

Interior work will be done to bring the space up to Traders Point standards.

“The biggest portion of renovations will be to make it look like our brand,” he said. “The difference is, it’s got some historic features; we’re trying to respect that.”

One of the features, the terrazzo floor in the lobby, will be brought back to life by ripping up the carpet that covers much of it.

The building had been on the market since 2012 and was originally listed for $2.9 million by Rich Forslund and Matt Langfeldt of Colliers International. Stanley declined to discuss details of the transaction.

Several other congregations, as well as arts groups and charter schools, expressed interest in it, Forslund said, but backed off because of its large size. It sits on 1.8 acres, and the property also includes a vacant one-acre lot along Alabama Street.

“It was a lot to bite off for a lot of folks,” Forslund said. “But Traders Point is more than capable, based on its membership.”

Weekend attendance at the northwest location in Whitestown averages about 5,200, and the Carmel campus attracts about 700, Stanley said.

Worshippers at the northern campus are convening at Creekside Middle School in Carmel until renovations to their permanent home are finished. Traders Point bought the former Central Christian Church building at 1242 W. 136th St. and should move in by the end of the year.

Traders Point two years ago began exploring a multi-site church model to serve parishioners driving more than 20 minutes to the northwest location. Some who are driving 40 minutes from the south side will have their travel time cut in half with the addition of the downtown church, Stanley said.

The new church will be staffed by Rev. Petie Kinder, in addition to a children’s minister and discipleship minister. Most services will be conducted via video stream from the northwest campus, though.