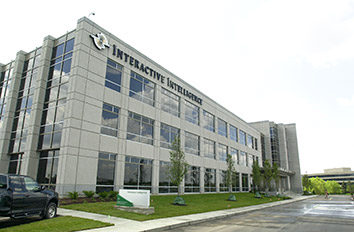 Interactive Intelligence Group Inc. employees are set to ring up more than $100 million in gains on stock options and restricted stock doled out by the company—a windfall observers said will bolster the local tech scene but probably not to the extent ExactTarget’s 2013 sale did.

Employees will cash in their options and so-called restricted stock units when Genesys Telecommunications Laboratories completes the $1.4 billion purchase of the call-center-software firm late this year. The $60.50-per-share purchase, announced Aug. 31, will yield$103.8 million in option and restricted-stock gains, according to an IBJ analysis of public filings.

Companies hand out options and restricted shares to motivate employees. Options give employees the right to buy shares in the future at the price on the date of grant, while restricted shares convert into common shares upon vesting. When Salesforce.com Inc. purchased marketing-software firm ExactTarget in 2013 for $2.5 billion, ExactTarget employees reaped gains topping $320 million.

ExactTarget’s equity-award impact is more than three times that of Interactive’s—even though ExactTarget had a smaller workforce (1,700 compared with Interactive’s 2,300). The difference reflects ExactTarget’s especially rich selling price and its board’s more aggressive philosophy in doling out equity awards.

ExactTarget had been in business only 13 years—less than two as a public company—when its shares were acquired for 23 percent above their all-time high, ensuring gains for everyone who held options.

Meanwhile, the 22-year-old Interactive, which went public in 1999, has seen some of its options slide underwater, meaning the exercise price is higher than the market price, leaving them worthless. While the company’s purchase price is a robust 36 percent premium to where its shares traded before sale talk hit the press in July, it’s also 32 percent below the stock’s all-time high reached in March 2014.

Tech observers said that despite those differences, they view Interactive’s sale as a net positive for the city, mostly because exit events spur some employees to invest their money and talent in new places.

But Interactive’s exit may not be as widely felt.

“You can fund companies, you can start companies or you can go join companies,” said Rod Feuer, a former consultant and technology executive based in Indianapolis, speaking about typical employee paths after an acquisition.

“If fewer people have a windfall that’s meaningful and they do choose to leave, it might be more in the ‘becoming an employee somewhere else’ [category].”

The $104 million in gains do not account for shares that Interactive executives and rank-and-file employees hold outright—meaning paydays could be bigger. CEO Don Brown, for instance, holds about $228 million in stock in addition to equity awards valued at $6.8 million.

Regulatory filings show the company has been more tightfisted in grants of equity awards over the last decade than it was earlier in its history. According to the filings, the company went from granting stock options to “every employee” in 2005 to doing so for “many employees” in 2006.

At the end of the second quarter Interactive had about 1.3 million options on the books, with an average exercise price of $35.40. ExactTarget had about11.1 million options outstanding in the quarter before its sale was announced.

Mark Hill, a local investor and Interactive board member since 2004, said the board scaled back options in favor of restricted stock units. These so-called RSUs, which vest over time, cost employees nothing and were free of the risks that came with options.

“We landed on the idea that most employees would prefer to have a bird in the hand,” Hill said. He noted that Interactive’s stock has been particularly volatile over the past several years and that the company issued some options that exceeded the Genesys sale price.

But the company didn’t ramp up RSUs to the extent it scaled back options. According to filings, Interactive debuted RSUs in 2011 and only has granted them to “certain employees” since then. At the end of the second quarter, it had about 1.2 million restricted stock units on the books.

By comparison, ExactTarget had about 1.3 million RSUs on the books. While its RSUs were restricted to certain employees, its options were granted to all employees, spreading the wealth.

“We took a very different approach and wanted everyone to feel like an owner,” said Tim Kopp, a former ExactTarget executive who now runs the Indianapolis office of Hyde Park Venture Partners.

ExactTarget went on to spawn a number of investors, including former CEO Scott Dorsey, who now runs venture studio High Alpha; entrepreneurs, including Torchlite founder and CEO Susan Marshall; and those who are experts at growing startups, such as Bluebridge Chief People Officer Todd Richardson. 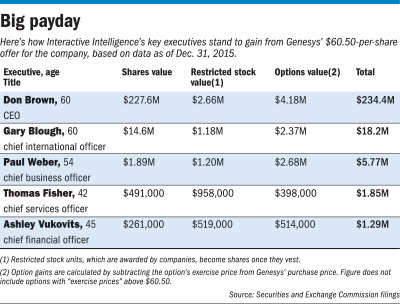 Hill acknowledged ExactTarget has had a significant impact on the local tech scene, but he added “there aren’t many companies anywhere in the world that had the kind of success that Scott [Dorsey] and his team had.”

One notable aspect of Interactive’s sale, tech observers said, is the sizeable stake Brown, the founder, was able to maintain. He holds 18 percent of the shares, while Dorsey held 3 percent of ExactTarget when it sold.

Feuer, the former tech executive, said money matters after an exit event, but it’s not all that matters. He said people who have worked for other companies that have sold, such as marketing software firm Aprimo, tend to have a “halo effect” at younger outfits they join—even if they didn’t get a big windfall.

“So forget about the cash,” he said, “they have that experience that other people haven’t had, that people will value in a smaller company.”

Hill said exits are not only about wealth creation, but also about what the acquirer plans to do with the workforce. In the case of Genesys, it plans to maintain the 1,000 employees Interactive has in Indianapolis, making this office its largest.

Salesforce also has remained committed to a strong Indianapolis presence. This spring, the company announced it was increasing its workforce here from 1,400 to 2,200 as part of an expansion into the former Chase Tower, now known as the Salesforce Tower.

“I would argue that the good that happens with the growth and sales of companies … has less to do with financial capital and more to do with human capital,” Hill said. “Think of all the high-paying jobs created by these companies and the highly talented people they have been able to recruit, many of them coming from outside of Indy.

“These great jobs, along with the successful experiences of the team, are the real story of driving economic development in central Indiana.”•