After nearly a decade sitting on the back burner, a massive mixed-use development has been reintroduced in Westfield—although it still needs to win the support of local officials.

Developer Chris R. White initially proposed the 317-acre, $300 million project known as Aurora in 2006 and in the two years that followed received the necessary approvals from what was then the Westfield Town Council.

But the development—which would have included multi- and single-family housing, retail, warehouses, office buildings and a park—fell victim to the Great Recession, White said.

“All development projects pretty much halted for the next five years,” he said.

Even before the economic crash, the project had faced hurdles. At the time, some residents and officials had concerns about the project—to be built near the southeast corner of U.S. 31 and State Road 38—and the Westfield Plan Commission sent a negative recommendation to the council.

The council approved it anyway.

Now, White is trying to modernize the plans he proposed a decade ago and start building next year. City officials have been coordinating with White for about a month, and the Westfield City Council got its first glimpse at the new planSept. 12.

The most significant change is an increase in proposed commercial space and a corresponding decrease in other areas of the development, including residential units.

In 2006, the commercial section —designated for light industrial and warehouses—had been expected to occupy only 85 acres near the center of the property, but White wants to increase that section to 218 acres. 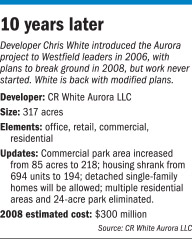 As a result, the previously planned 56-acre business park bordering U.S. 31 that was to feature offices, hotels and retail has been cut to 20 acres, and the number of housing units has been reduced to 194.

The original proposal outlined four housing sections with a total of 694 units on 130 acres, and a 24-acre park with space for a variety of elements, including a golf course, greenhouse and child care facility.

The retail section on the northeast corner of the property near State Road 38 and Grassy Branch Road remains the same, with 17 acres dedicated to that use, but White is asking that a gas station be among the permitted uses.

“That’s more of the market need over the next several years,” White said of the updated zoning map. “This is the more appropriate use for this location.”

The council could approve zoning for the project as early as November, but so far, some council members aren’t enthusiastic. Council member Cindy Spoljaric said the new zoning document submitted by White frequently references the 2006 zoning document, which made it difficult to comprehend the changes being requested.

“It was beyond confusing to me,” Spoljaric said. “My hope would be that you’d start from scratch.”

Matthew Skelton, director of economic and community development for Westfield, said it’s possible a new document could be drafted as the zoning request moves through the approval process.

“There’s a lot to do with this one before it gets done,” Skelton said.

So why is White reviving the project now?

He said several major investments in the area, including the Grand Park Sports Campus, upgrades to U.S. 31 and the nearby Chatham Hill residential development, have made the Aurora property even more attractive.

The $350 million U.S. 31 improvement project, which started in 2011 and recently finished, upgraded about13 miles of roadway from Interstate 465 to State Road 38 to interstate standards. The redesigned thoroughfare has made traveling the corridor noticeably faster.

“A lot has changed in this area in the last 10 years,” White said, singling out U.S. 31 upgrades as the biggest improvement.

Westfield Mayor Andy Cook has said he expects the 191st Street interchange, which would serve as one of the main access routes to Aurora, to be the next hot spot for development in the city after the State Road 32 interchange is built out.

Grand Park—the city’s nearly 400-acre sports campus featuring soccer fields, baseball and softball diamonds, an indoor basketball and volleyball facility, and indoor soccer complex—opened to the south of the Aurora site in 2014. The park has seen millions of visitors since it opened.

To the west of Aurora and U.S. 31, the 800-acre upscale golf community known as Chatham Hills will still take years to build out, but some of the first residents started moving in this year, bringing more traffic to the area.

White said those projects have made “the outside world aware of Westfield and the potential growth opportunities.”

Wes Podell, senior vice president at Indianapolis-based PK Partners LLC, said in general, large mixed-use developments “are difficult to execute” because you have to accommodate a variety of demands.

“These projects can take time to develop and sometimes you have to reinvent yourself to stay relevant,”Podell said. 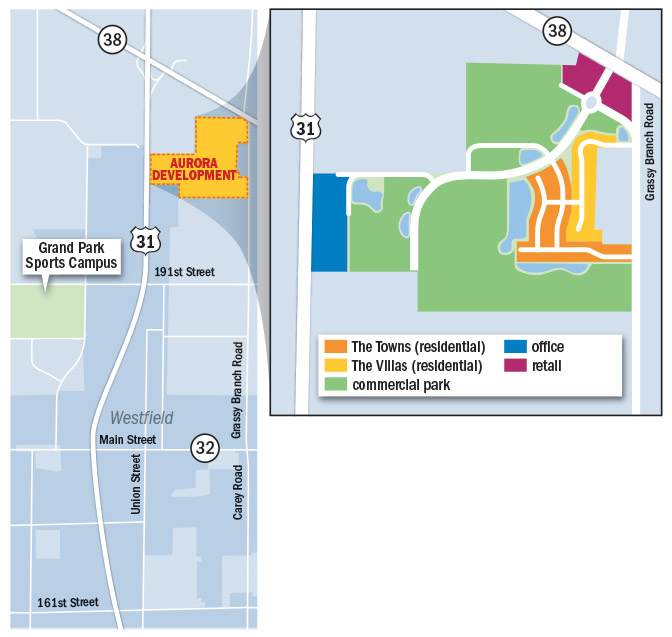 After working as the president of land development for Davis Homes from 1990-2000, he started CR White Development LLC. He later renamed it Site Solutions LLC, which sets up separate legal entities to develop its various projects.

In 2002, under the name W and C Development Co. LLC, White led a 210-acre development known as Cumberland Pointe in Noblesville.

Today, Cumberland Pointe includes apartments, single-family homes and office and industrial space near the southeast corner of Cumberland Road and Greenfield Avenue. Prospect Park is also within the development.

The 220-acre project will include single-family residential, apartments, senior housing, and commercial and retail space.

White said he doesn’t have an updated price tag for Aurora, and it’s uncertain whether the city will commit public dollars to the infrastructure.

In 2008, the city established a tax increment financing district around the property with the intention of providing possibly $6 million for road, utility and drainage work.

TIF districts typically expire after 25 years, but since the area has seen little incremental growth and the city hasn’t tapped into the fund, the clock hasn’t started ticking on the designation, according to city spokeswoman Erin Murphy.

“From the city’s perspective it is a brand new proposal,” Murphy said.

“Whatever agreements were made before are not an indication of what will be agreed upon this time around.”

White said those discussions are ongoing. So far, none of the roads proposed for the property have been constructed. White expects that to occur sometime next year, and the entire build out to take 10 years.

“Westfield is going to continue to grow. This type of development is very critical to have both a residential and commercial tax base.”•