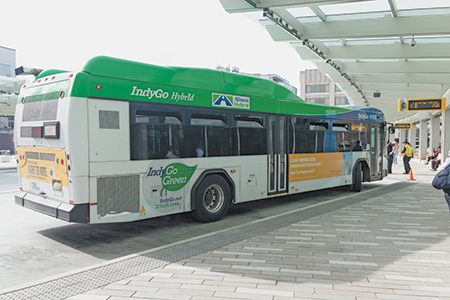 But those expectations never came to pass. A combination of factors, including a sharp drop in fuel prices, has depressed the market for hybrids. Allison’s hybrid bus transmission sales have tanked, and the company says it’s postponing production of hybrid truck transmissions until market conditions improve.

Hybrids are more expensive, but also more fuel-efficient. Customers pay more upfront, with the expectation that the extra cost will be mitigated by lower fuel costs over the life of the vehicle. But when fuel prices drop, the equation falls apart.

In 2010, Allison reported $156 million in hybrid bus transmission sales, or about 8 percent of the company’s total sales 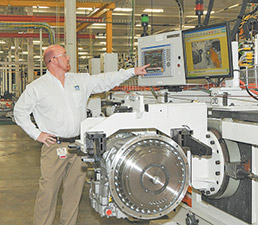 Allison also developed medium-duty-truck hybrid transmissions, like the one above, but has postponed full production until market conditions improve. (Photo courtesy of Allison Transmission)

The company’s hybrid sales have dropped every year since, and last year reached only $73 million, or 4 percent of Allison’s sales.

Diesel prices, which as recently as 2014 were $4 per gallon, have averaged $2 to $2.45 per gallon this year, according to the U.S. Energy Information Administration.

In 2008, when Citilink was deciding to buy new buses, diesel prices were high and volatile. The national average per-gallon price rose as high as $4.70.

The lofty prices helped persuade Citi-link officials to give hybrids a try.

“We were cutting service because we didn’t have the money for gas,” said Betsy Kachmar, Citilink’s assistant general manager.

The hybrid buses each cost $670,000, Kachmar said, about double the price of non-hybrids. Federal stimulus money was available at the time, which brought down the cost.

Kachmar said Citilink has been pleased with the hybrids, and would like to convert its fixed-route fleet to all-hybrid. But the financial case is no longer as compelling.

“Our next order could very well be a straight diesel bus because we don’t have enough money to buy a hybrid,” she said.

With that subsidy no longer available, Luellen said, “any future purchase will require us to evaluate hybrid performance with cost.”

Allison says in regulatory filings that expiration of government funding programs has hurt hybrid sales. So have advancements in alternative technologies.

As of January 2015, the most recent date for which data is available, 16.7 percent of public transit buses ran on hybrid technology, compared with 22.3 percent using a form of natural gas, according to the American Public Transportation Association.

The higher upfront cost of hybrids is an even bigger impediment in the commercial market than in the consumer market, said Zoran Filipi, department chairman for automotive engineering at Clemson University.

“There has to be a clear business case. There has to be a payback over a relatively short period of time,” said Filipi, who is based on the campus of Clemson’s International Center for Automotive Research in Greenville, South Carolina. “That’s clearly the challenge.”

The lower fuel prices go, the longer the payback period. But he said fuel prices won’t always be so low.

“We have to be prepared. One of these days, the prices are going to move upward again,” he said.

Allison in particular, he said, has had a pattern of “significant successes in the past,” interrupted by periods of low fuel prices.

Another reason for optimism, he added, is the phase-in of stricter environmental standards through 2017. In addition, California’s Air Resources Board is pushing for stricter emissions standards for heavy-duty vehicles.

While the board’s action will apply only to that state, it will have a national impact since manufacturers will build their vehicles to comply with those standards.

At the same time, Filipi said, traditional internal combustion engines probably can’t get much more efficient than they already are.

“We have kind of squeezed out as much as we can from conventional technologies,” Filipi said, a reality he believes leaves room for growth of both hybrids and electric vehicles.•