Home » Analysis: Trump’s win a shock to the system 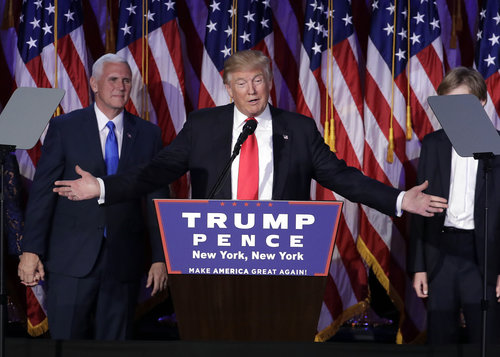 There's no other way to describe the massive change Americans voted for Tuesday.

In electing Donald Trump to the White House, Americans handed the reins to someone whose campaign was premised on an unrelenting challenge to the status quo, distrust in government and dismissal of the politicians from both parties. They chose a man who promised to channel their anger, as much as carry their hopes. He didn't merely promise change, he promised disruption.

The ramifications of the Trump presidency are difficult to measure. In his ugly, knock-down fight against Democrat Hillary Clinton, his personality was a draw more than his policies. The stump speeches that drew thousands to raucous rallies were laced with proposals but powered by his one word political philosophy: "Winning."

But it resonated in a way few expected with white, working-class America, across the Rust Belt and in rural communities, where the scars of the Great Recession endure and winning felt like a long-lost concept. He understood their anxiety about jobs moving overseas and immigrants moving in. He claimed to hate the liberal media as much as they did. He sounded like no politician ever.

This was their uprising, the elevation of a 70-year-old reality-TV and real estate mogul willing to speak their truth, rewrite rules and insult anyone along the way.

It is nothing short of whiplash—for Americans and people around the world who were alarmed by his harsh rhetoric about longtime allies and other cultures.

Trump's victory comes eight years after a coalition of blacks, Hispanics, women and young people elected the first black president and ushered in what many viewed as a new era of progressive dominance in presidential politics. Tuesday's results are a stunning, if confusing, indictment of the policies of President Barack Obama, who nevertheless remains popular.

"There's nothing like it in our lifetime," said presidential historian Douglas Brinkley, who in the days leading up the election dubbed a Trump win a "social revolution" on par only with Franklin Delano Roosevelt's clubbing of Herbert Hoover for his handling of the Great Depression in 1932.

To many policy experts, economists, military brass, diplomats—the establishment, Trump would say—Trump's proposals are viewed as improbable, impossible, and at times unconstitutional. Democrats and Republicans in Washington recoiled from his proposed ban on Muslims from entering in the U.S. Few think his vow to force Mexico to pay for a wall along the border is workable, at best. And really only Trump knows if his promise to "bomb the s–t out out of" the Islamic State group in Iraq and Syria seen is anything more than bluster.

There's mixed evidence on whether Trump's victory is an endorsement of such plans. Voters sent enough Republicans back to the Senate to give the GOP control of both chambers, a clear government mandate.

But for all the talk about immigration, exit polls showed it was a low priority for most voters. Just 1 in 10 voters said immigration was the most important issue facing the country. More than half of voters opposed Trump's plan for a "big, beautiful wall."

Clearly, what many voters opposed was Clinton.

The former secretary of state and veteran of two decades of political battles proved to be an exceedingly damaged candidate, distrusted both by her supporters and opponents alike. Her historic candidacy, to be the first female president, failed to rouse the enthusiasm or emotion that drove Obama's coalition to the polls. Her disconnect with white, working-class voters appears to have been her downfall.

Even Obama's dire warnings—"the fate of the Republic rests on your shoulders"—didn't do the trick.

It wasn't enough to scare people about a President Trump. Americans had fears about Clinton, too. Her penchant for secrecy was spun into scandal with brutal impact. Her use of a private email server as secretary of state not only dogged her for months—but returned at precisely the wrong moment in late October when FBI Director James Comey notified Congress he was reviewing new emails for evidence that she or her hands mishandled classified information.

Comey cleared Clinton again Sunday, but in the nine intervening days, as a cloud of suspicion hovered over her, nearly 24 million people cast early ballots. That's a sizeable chunk of all the votes cast for president.

Trump's win made a mockery of all the usual political rules. He had virtually no ground game, his advertising on television didn't come close to matching his rival's. He largely ignored the practice of voter targeting and analytics, elevated to religion after Obama's two victories. Clinton's campaign raised $513 million—roughly double what Trump raised, including $66 million from his own pocket.

While pollsters and political professionals in both parties dismissed him, he declared he had galvanized long-alienated voters into a movement.
"The forgotten men and women of our country will be forgotten no longer," Trump declared.