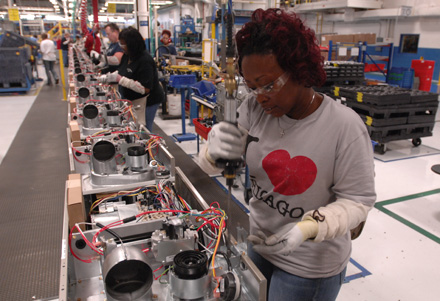 Donald Trump isn’t even president yet but in a span of just 12 days he’s twice claimed victory in getting major U.S. corporations—Ford Motor Co. and Carrier Corp.—to keep manufacturing jobs in America.

The Carrier deal will be officially unveiled Thursday afternoon in Indianapolis.

Regardless of how substantive the deals prove to be, the strategy signals that the man who prides himself as a master negotiator will use his bully pulpit to cajole companies into toeing the administration line, a tack reminiscent of the bygone interventionist policies of Lyndon Johnson, John F. Kennedy and Teddy Roosevelt.

Many experts say the piecemeal approach, while saving some jobs, is probably too little, too late to reverse the long-term decline in manufacturing employment in America.

What’s more, for companies caught in Trump’s cross-hairs, risks abound. For one thing, no CEO or company wants to be a highly-public target of the president’s ire. (Carrier barely even tweeted about the discussions before the deal was reached.) And even if they’re granted financial incentives to keep jobs at home, corporations may find themselves stuck using antiquated technology at high costs, putting them at a disadvantage to rivals who have shifted jobs to low-cost countries.

“If Congress wants to erect some kind of financial Berlin Wall that prevents U.S. companies from locating productive assets abroad, let them pass a law,” said Daniel Griswold, a senior research fellow at George Mason University’s Mercatus Center. “But let’s not have our president bullying U.S. companies to retreat from global supply chains and global markets.”

Trump made reversing manufacturing job losses a staple of his presidential campaign, thrilling Midwestern crowds with promises to scrap or renegotiate trade deals and slap tariffs on imports if necessary. It’s likely no coincidence that Ford and Carrier, a unit of United Technologies Corp., are the first to announce pullbacks from Mexico. They were two of his favorite targets during the campaign. So too were Mondelez International Inc., the maker of Oreo cookies, and Apple Inc.

Mike Mitchell, a spokesman for Mondelez, said the company has spent $450 million since 2012 to modernize domestic factories and remains “committed to investing in our U.S. manufacturing network where it makes business sense to do so, as we seek to become more efficient, effective and competitive.’’ Apple said it was “investing heavily in American jobs and innovation.’’

It’s possible, as the Apple and Mondelez statements suggest, that all this attention from the president-elect will force companies to think a bit more about saving domestic jobs and a bit less about near-term earnings—an outcome that would be well received by many across the U.S. political spectrum.

Carrier will keep about 1,000 jobs at a factory in Indiana, the company said in a statement late Wednesday. Incentives offered by the state were “an important consideration,” it said, without elaborating.

Moving the operations would have saved the company about $65 million a year, which translates to a relatively insignificant 2 cents a share in earnings, said Howard Rubel, an analyst with Jefferies. Trump has pledged many times to cut corporate tax rates and regulations to spur job growth.

United Technologies, a major defense contractor, may be currying favor with the incoming administration, said John Mutz, chairman of the policy committee of the Indiana Economic Development Corp. “When you’re a supplier and the new administration is coming in, you want them to think favorably of you as a supplier,’’ Mutz said.

What landed Carrier on Trump’s radar was its announcement in February that it was cutting 1,400 jobs in Indianapolis. Trump highlighted the news at rallies across the country. The threat of a 35 percent tariff on air-conditioning units and goods returning to the U.S. would scare Carrier executives into reversing their decision to move the jobs, he said.

“Here’s what’s going to happen,’’ Trump said during an April 27 rally in Indianapolis. “They’re going to call me and they are going to say, ‘Mr. President, Carrier has decided to stay in Indiana.’’’

On Tuesday night, Trump tweeted that he had reached a deal with the company.

Trump also put Ford on the hot seat during the campaign for manufacturing vehicles in Mexico. But the circumstances of the automaker’s retreat from Mexico are even murkier than the Carrier deal. In a tweet on Nov. 17, Trump appeared to claim responsibility for Ford changing course on moving production of a Lincoln sport-utility vehicle, the MKC, to Mexico. He posted the tweets after Bill Ford, the company’s executive chairman, told him that the automaker no longer planned to move MKC production to Mexico.

Ford, though, never planned to close its Louisville plant, which also builds the Escape SUV that outsells the Lincoln version by 12-to-1. Ford already makes the Lincoln MKZ sedan in Mexico and is still planning to move all its North American small car production to Mexico.

Intervention of this magnitude has little precedent in recent American history. Back in the 1960s, Lyndon Johnson was quick to call up corporate executives he was unhappy with. Johnson’s obsession was fighting inflation, though, not protecting jobs.

When Bethlehem Steel raised prices, he labeled the company unpatriotic and bullied it into backpedaling. And when he realized he had little ability to force farmers to scale back egg price increases, he ordered his surgeon general to issue warnings on the health hazards that eggs pose, Robert J. Samuelson wrote in “The Great Inflation and Its Aftermath.”

Johnson’s efforts were largely unsuccessful. By 1968, the last year of his administration, inflation had jumped to 4.7 percent.

Trump’s jawboning is trying to reverse a trend that goes back decades. U.S. manufacturing jobs have fallen by 29 percent in the last 20 years to a preliminary figure of 12.3 million in October, according to the Bureau of Labor Statistics.

Advances in productivity, aided by factory automation and technology such as 3-D printing, will ensure that most of the lost jobs won’t return, said Jefferies’s Rubel.

“Manufacturing jobs represent a smaller part of the economy today than they ever have, and they can’t come back,” he said.

Even as Trump and Vice President-elect Mike Pence are heralding the Carrier news in Indiana, for example, officers with United Steelworkers Local 1999 are negotiating with Milwaukee-based Rexnord Corp. on severance benefits for about 350 Indianapolis workers, union secretary Lisa Duncan said. The company is closing its plant there by June 2017 and shifting much of its bearings manufacturing to Mexico, she said.

Other experts suggest that Trump’s approach, even if successful at times, will harm the economy and companies. If firms like United Technologies retreat from global markets, they will become less profitable and competitive, creating fewer jobs, said George Mason’s Griswold.

Besides, it’s ridiculous to think that Trump will go around the country hounding companies to save jobs in dribs and drabs, said Lee Branstetter, a nonresident senior fellow at the Peterson Institute for International Economics.

“It would be an enormous amount of effort and after a while people would start tuning out,” he said. “The 27th time he tries this, it’s just not going to have the same punch and he knows that.”

Perhaps, but right now, the jawboner-in-chief appears to be just warming up.