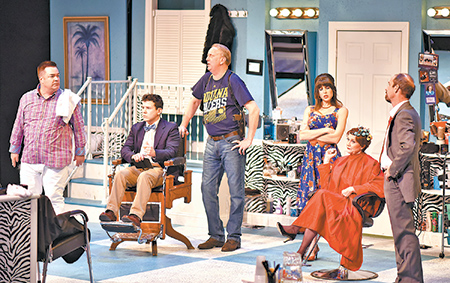 However, that same year, a play opened in a small Boston theater that would go on to become one of the longest-running non-musical plays in the world.

That hair-salon-set show, “Shear Madness,” experienced multi-decade runs there and in Washington, D.C., with additional productions popping up around the world. Such crowd-pleasing, Guinness-Book-record-setting success is hard for producers to resist, and Beef & Boards Dinner Theatre has belatedly jumped on the bandwagon (through Jan. 29).

Before I get to the awfulness of the play, I’d like to talk about how good B&B’s production is.

From the pre-opening sequence through the inevitable, “Hey, folks, it’s different every night” announcement before the curtain call, Director Eddie Curry and his company do wonders to distract us from the weak, dated material. The wordless opening—mostly consisting of a wash and cut for Mikey (a woefully underused Nathan Robbins)—makes strong use of Michael Layton’s bright, smart set and effectively introduces us to the instantly appealing hairdressers Tony (a playful Daniel Klinger) and Barbara (the equally game Jenny Reber). 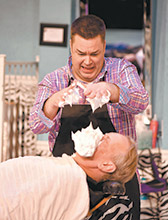 Soon, mysterious, briefcase-toting Eddie (a welcome return to the stage for the once-ubiquitous Michael Shelton), socialite Eleanor (Suzanne Stark) and detective Nick (a surprisingly—and refreshingly—restrained Jeff Stockberger) are on the scene, a murder victim is discovered upstairs, and an investigation—of sorts—begins.

That’s when the fourth wall breaks down, the houselights go up, and all the suspicious activity from the suspects in the salon is re-created—with the audience serving as fact-checkers to verbally out those who try to change history. Unlike the scripted scenes—which are peppered with punchline-free set-ups, weak attempts at incorporating local and topical references, and random bits of business that exist without regard for the building of consistent characters—these guided improvised moments are the show’s reason for being.

The talented company seems ready for anything the audience throws back at them, and even the fake spontaneous moments and break-ups go down smoothly. Audience questions—collected by Stockberger in the lobby at intermission and further solicited live during the second act—prompt defensiveness, distraction and dubious alibis. 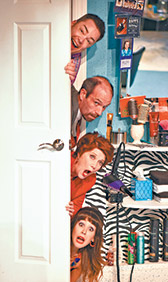 The show is built to have multiple endings, with the audience deciding whodunit. While this adds variety, it also means that all the amateur detective work by the audience—many of whom seemed adamant about actually solving the case—is for naught. Trying to discern the truth in an environment where truth is a matter of public polling is a fool’s errand. The clues are ultimately irrelevant, with the actors rehearsed for any of the possible voting outcomes.

Which wouldn’t be a problem if the denouement, at least on the night I attended, didn’t take such a melodramatic, laugh-free turn. After such high spirits, the overstaying-its-welcome, run-of-the-mill confessional scene left me yearning for more of the playful interaction that actually worked.

Still, in the right hands—as it is here—it’s easy to see a glimmer of why the show has lasted so long.•