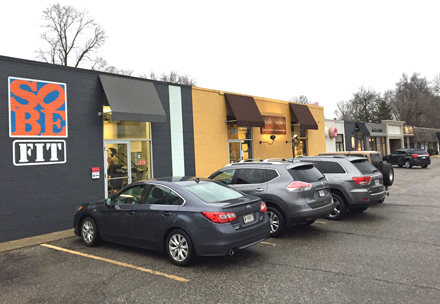 A years-long effort to convert three former industrial buildings on East 54th Street south of Broad Ripple into an eclectic mix of retail and studio space is nearing a major milestone with the arrival of Mass Ave Toys.

David and Suzy Reese own 54th & Monon Shops—three one-story buildings on either side of 54th Street just east of the Monon Trail that house about 20 eateries, art studios and other retailers.

The couple for 25 years operated Reese Kitchens on the property until selling the family business in 2012 to Ferguson Bath Kitchen & Lighting Gallery.

They since have focused on filling the three buildings with a broad array of tenants, including Dancing Donut, Random Acts of Flowers and the Surroundings fine antiques store. And they're nearly done with the project.

Mass Ave Toys is poised to move from downtown to the north-side retail center by Feb. 1, taking space in a 21,000-square-foot warehouse space on the Reese property that Ferguson outgrew and vacated.

Mass Ave Toys is taking 5,400 square feet of the former warehouse space, more than any other tenant 54th & Monon Shops, and will serve as an anchor of sorts. A yoga studio also is finalizing plans to take some of the remaining space, David Reese, 71, said.

“We try to get shops where the actual owners are in them,” he said. “Kind of like what Broad Ripple used to be.”

Once the rest of the warehouse space is leased, the complex will be fully occupied.

The origin of the 75,000-square-foot 54th & Monon Shops goes back to the year 2000, when one of the Reeses’ daughters, Katy, opened an art gallery in one of the few empty storefronts. Reese Kitchens used most of the space to store cabinets. But the idea to begin converting from industrial to retail uses didn’t gain steam until 2008.

“2008 changed it all,” Reese said. “When the market died, we had empty warehouses. And people wanted to move in.”

The Reeses first bought the former Woods Wire factory building that housed Reese Kitchens, and now Ferguson. Mass Ave Toys will be in the warehouse space connected to that building, at 1057 E. 54th St. and closest to the Monon, joining Random Acts of Flowers. The not-for-profit arrived in September.

The couple purchased their second building, 1134 E. 54th St. on the north side of the street, in 1999, and then the one to the east of the Ferguson building at 1101 E. 54th St. in 2005. One of the newest arrivals there is The Gallery Pastry Shop, which opened in October.

“The Reeses have been very receptive and supportive of me,” artist Formsma said. “This whole area has a wonderful sense of community and the spirit of entrepreneurship.”

Mass Ave Toys in October committed to 54th & Monon Shops. The store’s move from 409 Massachusetts Ave. was triggered by the sale of the building, which closed Sept. 30, to Monon Housing Partners LLC.

Monon’s Annex Student Living division will occupy the second and third floors and market the first floor space occupied by Mass Ave Toys to a restaurant.