Amid the piles of rubble left from the demolition of the Citizens Energy coke plant, Mayor Joe Hogsett on Tuesday morning told a crowd of dozens how the site and surrounding neighborhood on the southeast side could be transformed by a new criminal justice center.

The city selected the site from a dozen locations that also had been under consideration by the Ballard administration. The hope is that the so-called Community Justice Campus will provide enough traffic to help revitalize the struggling Twin Aire neighborhood with an influx of new businesses.

The parcel at 2950 Prospect St. (click on image below for larger view) first will need to be remediated of the contaminants in the soil—a process that could take years. But a justice center could be built while cleanup is still occurring, so as not to delay construction for too long, officials with the city and Citizens Energy said.

“There will be an overlap in remediation and the construction project,” said Andy Mallon, the city’s corporation counsel. “There will be a nice mesh between the two.”

Citizens Energy is responsible for the cleanup, which could cost “millions of dollars,” said Dan Considine, the utility’s spokesman. The dominant contaminant in the soil is a substance called coal tar, a byproduct of the coke manufacturing process. 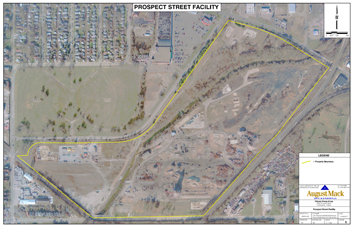 The Citizens Energy coke plant site generally runs between East Pleasant Run Parkway to the north and Prospect Street to the south. Click on photo for larger image. (Image courtesy city of Indianapolis)

The plant produced coke, a solid carbon material that used to be used as fuel, until it closed in 2007. It opened in 1909 and “once produced all of the gas used for heating and other purposes in Marion County,” according to Citizens.

“It has to be done,” Considine said of the cleanup. “It’s our responsibility. We committed to that.”

“I understand that this site carries with it its share of challenges,” he said. “But I am convinced that our whole city will be the better for it.”

By the end of February, the city should know what funds are available to help build the justice center, which is expected to cost as much as $600 million. A construction schedule could be set by the end of March, Mallon said. After that would come the solicitation of project bids.

The City-County Council still must approve the project before work starts.

The prospect of a criminal justice center, along with the Local Initiatives Support Corp.'s adding the Twin Aire neighborhood in late December to its Great Places 2020 initiative, provides hope for the area's residents, officials said.

Total investment this year in the Great Places Initiative is expected to top $17 million.

“The timing of the justice center can also be integrated into that,” LISC Executive Director Bill Taft said. “The justice center is a positive piece to the overall revitalization of the neighborhood.”

The criminal justice campus, which will include a 2,600- to 3,000-bed jail, is part of a series of reforms Hogsett wants to implement to reduce the number of people using the jail and courts system.

The justice center would include an intervention center focusing on mental health and substance abuse treatment needs, as well as acute health care and mental health units. A consolidated civil/criminal courthouse is also a possibility, although the mayor wants judges to weigh in on whether to move their courts to the new location.

The center would replace criminal justice functions now scattered throughout downtown, including the Marion County Jail, which Sheriff John Layton described as a relic.

The city selected the Citizens coke site from a list of a dozen locations scattered throughout the city first identified by Hogsett’s predecessor, Mayor Greg Ballard. He proposed building a criminal justice center on the former General Motors stamping-plant site south of the Indianapolis Zoo.

That plan failed to pass the Democrat-controlled City-County Council due to concerns over its cost and public-private financing model.

Hogsett removed the stamping plant site from consideration, because city officials hope to attract some sort of mixed-use development to the location that will connect it and the surrounding Valley neighborhood to downtown.