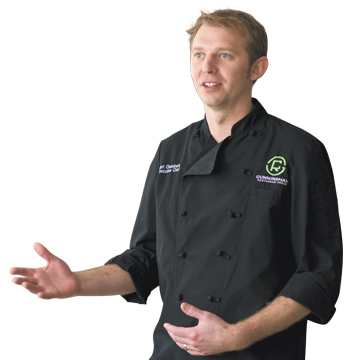 is helping shape the dining habits of central Indiana and beyond.

Getting here: “I worked in restaurants from the time I could work,” Chambers said. He found himself making good money as a kitchen manager so he left college, returning 10 years later for culinary school while holding down a full-time job. He completed the two-year program in 18 months. “It was all stuff I had done before.”

An externship at a resort in Portland, Oregon, led to a job offer, but it didn’t pay enough, so Chambers printed a fistful of resumes and went door to door. After a few years at a busy French brasserie, he moved to Indianapolis because his wife was accepted into the Indiana University School of Medicine. “I was a little nervous about coming back, remembering what the food scene was like. I wanted to still be able to make a good living but not for a corporate restaurant.” He found an Indy dining scene in transition and fell in with the Cunningham Group, becoming executive chef at Stone Creek Dining Co. in Noblesville. With Cunningham, he went on to open Moerlein Lager House in Cincinnati before becoming the company’s executive chef.

Inspirational moments: “Working in Portland, Oregon, with the amazing food scene changed the way I look at creating seasonal menus that guests enjoy. … All these local foragers with chanterelles and morels and all these different greens would show up at the back door and you just tell them what you want.”

On hiring: “Obviously, a great cooking background is a great addition,” he said, but core values of honesty and being a team player are also key. “I can teach somebody to cook. I can’t teach them how to be a good person or a team player. … At this point in your life, you are either that kind of person or you aren’t.”

Any customer pet peeves: “Not necessarily. We’re here for them. They are the ones writing our paychecks. If we don’t make them happy, they don’t come back.”