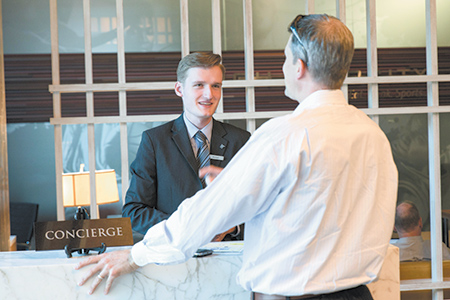 Local hoteliers and hospitality officials are bracing for a soft 2018.

Experts are projecting hotel room bookings by conventions and groups will fall 19 percent in Indianapolis next year, a hit that will strike not just hotels but also the agencies and facilities funded by tourism taxes.

And some in the industry are pointing to the fallout from a controversial 2015 law as the culprit responsible for an expected one-year downturn.

That’s because conventions and groups generally book events at least three years out. So the economic impact of the legislative fight over the Religious Freedom Restoration Act—and the resulting national outcry about the state’s approach to gay-rights issues—wasn’t felt immediately. Instead, it is reflected in bookings for 2018.

“There’s no doubt, 2018 looks like a bad year,” Visit Indy CEO Leonard Hoops told the Capital Improvement Board in a meeting this month. “It’s not impossible to get back to pace, but it won’t be easy and I don’t expect us to get to 2016 and 2017 levels.”

“That’s what we feel is a good, healthy number,” Hoops said.

If that forecast holds true, CIB will likely lose millions of dollars in tax revenue—money used to operate the Indiana Convention Center and Lucas Oil Stadium and fund the vast majority of Visit Indy’s $14.6 million budget.

Taxes from hotels, food and beverages, and car rental alone count for more than $65 million of CIB’s annual revenue—about two-thirds of all the tax money coming into the quasi-governmental organization.

Visit Indy is projected to book 677,593 hotel room nights for 2018, according to Strategic Data Resources’ Trend Analysis & Projections Report. That’s the lowest number since 2011—before the most recent convention center expansion.

CIB officials declined to make predictions about the budget impact of fewer bookings. But assuming the 19 percent trend holds, the tax-revenue decline from the previous year could be more than $12 million.

In addition, hospitality officials said a decline in Visit Indy bookings would almost certainly depress the price of hotel rooms, which would further erode CIB’s tax base.

An industry-wide economic downturn—which some are forecasting—could make matters worse.

“I’m probably being overly pessimistic about 2018,” said CIB board member Brenda Myers, CEO of Hamilton County Tourism. “I just think as a region we need to study 2018 and have a plan.”

CIB President Melina Kennedy is confident the group has enough money in reserve to cover its financial obligations should next year see a financial shortfall.

“We’re taking this very seriously and we’re going to continue monitoring it very closely throughout the year,” Kennedy told IBJ. “But we have to look at this not just year-to-year, but look at the big picture: 2016 and 2017 are very strong.”

The FFA extended a contract to hold its national event in Indianapolis through 2021 and the NCAA booked a Final Four here in 2021. So the post-2018 era looks like it’s bouncing back, Hoops said.

But “we missed a sweet spot of opportunity in 2015 for 2018,” Hoops said. “You can draw the conclusion that the negative publicity Indianapolis got in 2015 affected what we booked for 2018.”

Pressed on the issue, Hoops said the problem wasn’t the RFRA law itself.

“That was corrected pretty quickly,” he said, referring to changes former Gov. Mike Pence signed into law a week later, after critics complained the law could lead to discrimination against the LGBT community.

“It was all the negative publicity that went with it,” Hoops said. “We documented that we lost 12 conventions worth $60 million [in economic impact] in the RFRA aftermath and some of those were definitely for 2018.”

The numbers for early bookings tell the story:

To fill the gap for 2018, the Visit Indy sales staff has shifted into overdrive, trying to book smaller meetings that commit less than two years out. Hoops said his organization is “looking at e-marketing and direct-mail campaigns for 2018.”

“I have a lot of confidence in Visit Indy’s aggressive approach to this situation,” she said. “We still have time, and I think with a concerted effort, we’ll be in a better position than it appears we are now.”

Hoteliers aren’t ready to wave the white flag, either.

“While there’s some concern from hoteliers about 2018, we’re optimistic about the pickup of smaller, self-contained meetings,” said Patrick Tamm, president of the Indiana Restaurant & Lodging Association. “The hotels’ own sales staffs are selling hard and some of these self-contained meetings book three to six months out. So there’s time.”

But that strategy can be a tough one.

“Naturally, you want to land the big fish,” said Debbie Locklear, CEO of locally based Meeting Services Unlimited. “Filling in the gaps by booking a bunch of small and midsized meetings is a very time-consuming, labor-intensive process.”

Visit Indy will have to be careful not to lose focus on landing bigger events in more distant years by concentrating too much on smaller gatherings for 2018, Locklear added. “It can be a tricky balancing act.”

And it’s not unheard of for Visit Indy to land a big fish late. Last June, it signed a deal with Primerica Inc., one of North America’s largest financial services sales forces, for a show to be held this June 14-17. The event is expected to draw 50,000 attendees and have an economic impact of $35 million, according to Visit Indy.

But with the number of hotels continuing to increase in Marion and surrounding counties, the pressure mounts for Visit Indy to continue beating its goal of 725,000 room nights, industry experts said.

“I’m worried because we have a lot of inventory coming online,” Hamilton County Tourism’s Myers said. “And what happens in Indianapolis does have an impact here.”•