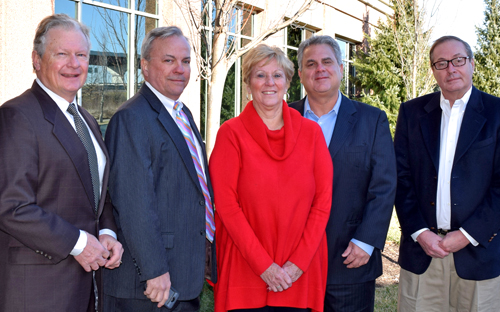 The firm announced Wednesday that John Franz and Rick Hursh have joined the company as senior vice presidents of institutional fixed income sales, and Sandy Garrett has been hired as registered client service associate. Franz, Hursh and Garrett spent 15 years, 21 years and 32 years, respectively, at City Securities Corp. before it was sold to Stifel Financial Corp. last year for an undisclosed price.

"By reuniting with Tom and Mike, John, Rick and Sandy add vital strength to our fixed-income team," said Robert Welch Jr., Noyes' senior managing director of its capital markets division, in written remarks. "Together with investment banker Mark Moore, the Noyes team possesses more than 150 years of collective experience in the municipal bonds sector and will be recognized for its in-depth experience with bond issuers and their advisers, as well as bond buyers and sellers.”

Franz, Hursh and Garrett all came on board within the past few weeks, Welch told IBJ. Enright and Geraty have been with Noyes for more than a year, but were somewhat limited in what they could do before the staff additions.

"The three parts need to be there for it to work," Welch said. "Underwriting, distribution and banking. It really does not work until you have it all there."

Welch said the idea for creating the unit came a few years ago, but the sale of City Securities created an opportunity for Noyes to make key hires.

"The reality of it is, Stifel already has a desk that does this in a different city in a different state" Welch said in an interview. "So, when they bought City, they just shut all of that down. So Indiana didn't really have a desk like that anymore, and now they do with a 109-year-old firm."

The fixed-income unit will underwrite primary municipal, taxable and tax-exempt bond issues. It will also create a secondary market in bond issues. They'll be doing Indiana-only issues to start, Welch said, and then expand from there.

"It sets Noyes apart in the Midwest," Welch said about the group, "and it positions us well for future growth."