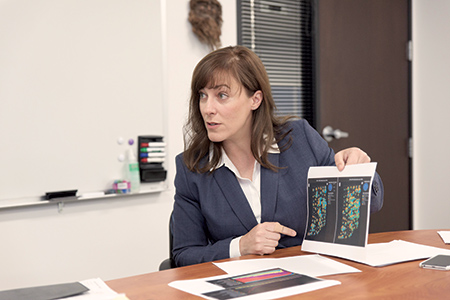 Indiana officials knew they had a drug epidemic on their hands.

Across the state, people were overdosing on opioid painkillers and heroin and flooding hospital emergency rooms. More than 1,000 Hoosiers a year were dying from overdoses. Drug seizures and arrests were soaring.

But how should Indiana fight the scourge? Where should it put new treatment programs or law enforcement resources? How much naloxone—the medicine that reverses the effects of opioid overdoses—should emergency responders carry?

The answer, or at least a big clue to the answer, was in big data. 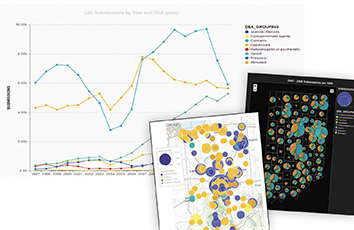 (Images courtesy of state of Indiana)

But what did it all add up to? The challenge was to share the data among all the agencies, make the information as real-time as possible, match and merge related information, then look for patterns.

For months, that process has been under way in the bowels of the Statehouse, where dozens of skilled workers in the state’s relatively new “data hub” are building a series of dashboards that organize and present information in a way that is easy to read.

The goal is to help agency heads make decisions based on the latest, best, most comprehensive information available.

No longer would they, or the public, have to jump from database to database to figure out what was going on.

“Indiana state government has these disparate silos where we have great information, but we have it in lots of different places,” said Micah Vincent, director of the state Office of Management and Budget. “We were not able to pull that information together to be able to see what’s going on across the board on various issues.”

To fix that, three years ago, the state spent $338,000 to upgrade a suite of offices in the basement of the Statehouse and some $2.5 million in upfront costs for data-tracking software. Then it hired or moved about three dozen data analysts, part of a new Management Performance Hub, to make the information more useful.

One early task: Help police understand why fatal vehicle crashes had climbed 7.5 percent in just one year, from 2014 to 2015.

Analysts examined several data sets and built a predictive mapping tool, which they called the Daily Crash Prediction Map. It forecasts crashes based on weather, traffic, road condition, time of day and census data. The goal is to have police target certain high-risk areas and reduce the number of crashes. A reduction of 1 percent a year could save lives and result in savings of $35 million annually.

Now the move is under way to do the same thing for the opioid crisis. Already, it appears to be paying off.

In her office a block from the Statehouse, Dr. Jennifer Walthall, secretary of the Indiana Family and Social Services Administration, looked through a series of slides prepared by the digital hub to try to get a handle on the epidemic. Her massive department includes the Division of Mental Health and Addictions, which administers opioid treatment programs.

Walthall wanted to know where the state should place four new addiction treatment programs, to supplement the existing 13. The programs offer medicine, counseling, help with transportation and job training, and other services for opioid addicts trying to stay clean.

“We wanted to see where our hot spots of overdose deaths were, and how far they were from the nearest treatment programs,” she said.

The analysts returned with a map showing all of Indiana’s opioid deaths from January 2008 to October 2016, along with data on which took place more than 30 minutes from an existing center.

At a glance, Walthall could see the problem: The gaps were in the eastern, north central and southern parts of Indiana. That’s where her department issued a request for proposals for additional programs. In a few weeks, the department expects to announce the proposal winners and the new sites.

Walthall looked at other slides. One glowed with large circles in various colors, showing a mash-up of drug-seizure data from state police and discharge codes from hospital emergency rooms. The map showed that not all of Indiana has been hit equally hard by the crisis.

The western part of the state, for example, had relatively little opioid activity, but it had other drug problems: cocaine, methamphetamines and other stimulants. It wouldn’t make sense, Walthall concluded, to spend huge resources for opioid programs in those areas.

“But until we had this kind of data in real time, we might have said, ‘Oh, we need a statewide program because we’re seeing so much opioid activity,’” said Walthall, who is also an emergency medicine physician. “But we don’t. We have targeted programs for certain areas.”

With the information, the state can even help outside groups trying to make critical decisions. The Volunteers of America, a not-for-profit that provides affordable housing and other help to needy people, was recently trying to figure out where to open a residential housing program for at-risk mothers and their children.

Analysts at the Indiana data hub examined which parts of the state had the highest birth rates (using birth certificates from the Indiana State Department of Health). Then they looked at areas with high volumes of opiate drug seizures (using data from the state police). Then they overlaid the two maps.

The darkest section of the merged maps, showing a combination of high births and high drug opiate seizures, was in eastern Indiana, near the Ohio line. The Volunteers of America studied that information and made a decision. Later this year, the group plans to open a 23-bed residential substance abuse treatment facility in Winchester, the county seat of Randolph County, for mothers and young children.

Overseeing the army of data specialists compiling all the dashboards is Darshan Shah, executive director of the state’s Management Performance Hub, whose background includes stints at Eli Lilly and Co. as well as health care startups.

His job is to get all 16 agencies that deal with the drug problem to share information and hand it over to his team.

His employees then spend weeks examining all the data sets and cleaning up inaccurate or incomplete records. The next challenge is to get all the data, which often has been compiled in vastly different forms, into the same format, so the information can flow back and forth between the databases and “talk to each other.”

Only then can the data nerds start working on the visuals. To do all this, they use an array of software tools, allowing them to manipulate, model and map information to make it most useful—from geographic dots on a map to massive tables that list drug seizures per county by year.

During a recent interview, Shah scrolled through his laptop, showing off one dashboard after another.

“This dashboard has four dashboards under it,” he said. “You can look at it in a map view or a table view. If we look at drug deaths over here, there’s a lot of different ways you can visualize it. You can look at it by county, by county specifically by opioids, counties by drug groups over time. You can pull fentanyl, you can pull cocaine.”

Indiana’s efforts are getting national notice. The Center for Digital Government, a research institute based in Sacramento, California, ranked all state governments for their digital performance and gave Indiana an A-minus (up from a B-plus in 2014) for a wide swath of work, upgrading agencies from the Bureau of Motor Vehicles to the Department of Revenue.

It pointed out that Indiana was hard at work “getting a handle on the state’s addiction problem” and that other states have reached out for help to get similar programs off the ground.

Shah said his group’s mission is simple, even if all the web-scraping and data-mashing can be laborious.

“We want to make the data digestible in a way that somebody can actually make decisions,” he said. “That’s what it boils down to.”•