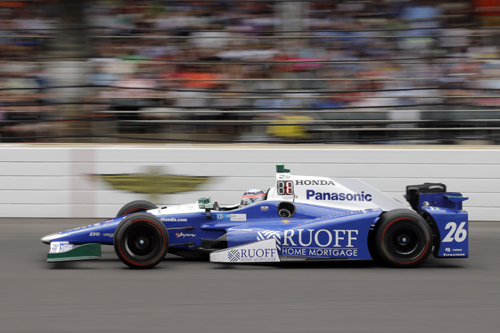 Takuma Sato has won the 101st running of the Indianapolis 500.

The Japanese driver who wrecked on the final lap while dueling Dario Franchitti for the lead in 2012 held off Helio Castroneves over the final laps. He gave Andretti Autosport its second consecutive victory and third in the last four years.

Sato screamed into his radio as he slowed down the front stretch, his Honda engine still under power after three others let go while their drivers were near the front of the race.

After barely avoiding two crashes, Castroneves failed to make the go-ahead pass on the second-to-last lap of Sunday's race and the three-time Indianapolis 500 champion wound up settling for his third runner-up finish. The Brazilian also finished second in 2003 and 2014.

Castroneves was 0.2011 seconds behind  Sato, and it came on his eighth attempt to get a record-tying fourth 500 win.

Sato's victory came in a year with a record number of drivers to lead the race (15), a late accident taking out several drivers, and several blown engines.

Oriol Servia, James Hinchcliffe, James Davison and Will Power were knocked out after they were involved in a wreck on a restart with 17 laps to go.

Davison had spent time in the lead after jumping into the car for Sebastien Bourdais, who was hurt in a qualifying crash last weekend. Servia was also at the front late in the race.

Servia appeared to touch Davison from behind in the first corner and both of them slid up into the wall. Hinchcliffe and Power were caught up in the carnage behind them.

Josef Newgarden touched the inside wall with his left front tire while trying to avoid the damage, sliding up the track. But he appeared to avoid any significant contact.

With 20 laps to go, Formula One sensation Fernando Alonso blew his engine, the third Honda to explode in the closing laps of the race.

The crowd went crazy for Alonso as he climbed out of his car.

Alonso, skipping the Monaco Grand Prix to run the race, had been fast all month and was near the front all afternoon. But as he tried to work toward the front late in the race, the Honda power that had been pushing for the lead finally let go.

Ryan Hunter-Reay and Charlie Kimball also had Honda engines expire, making nine of them during practice, qualifying and the race on Sunday.

After the race, a joyful Sato dumped a bottle of 2 percent milk over his head, received a kiss from the Indy 500 Princess and raised his finger in the air.

Andretti Autosport owner Michael Andretti ran down pit lane to reach Sato's crew, then rushed to victory lane to hug his driver, the first Japanese winner of the Indy 500.

"It was a tough, tough, race. Helio really drives well," Sato said. "It was a fantastic race."

As for the difference between 2012, when Sato crashed in the first turn of the final lap racing Franchitti, Sato said his strategy this year was perfect.

"I was pointing in the right direction into [Turn] One," he said.

Castroneves was disappointed to fall short of the four-time winners club.

"I really thought we had it," the Brazilian said.