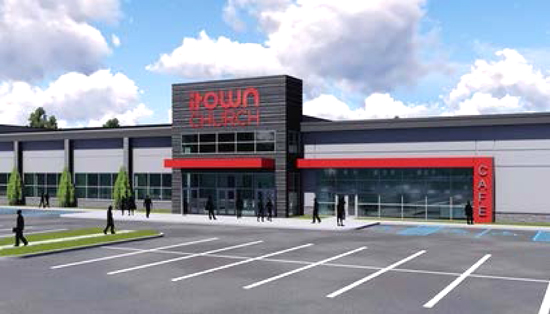 I-Town Church has moved a step forward in its controversial plan to build a house of worship at the busy intersection of 126th Street and Brooks School Road in Fishers.

The Fishers Plan Commission voted Wednesday night to recommend two land-use requests brought by the Fishers-based church for a second reading before the City Council on June 19.

I-Town had requested an amendment to the planned unit development to allow for a place of worship and applied for the primary plat to be subdivided to accommodate the church.

In the meeting open to public comment, I-Town parishioners flooded the Fishers City Hall Auditorium in support of the project, which is planned for a 27-acre plot of land now occupied by the existing Gray Eagle Golf Course driving range and clubhouse.

I-Town, founded in 2010, currently leases its existing Fishers church location at 126th and Cumberland Road in a small warehouse. Dave Stoeppelwerth of I-Town’s planning committee said the fast-growing church has been searching for a permanent home for four years.

The Gray Eagle site, he said, is the best option the church has found, he said.

The development plan, however, has raised concerns from neighboring homeowners over the loss of green space and the potential for increased traffic.

I-Town supporters shared stories of the church’s impact on their lives in an emotional plea to the plan commission. Some spoke of how their involvement in the church encouraged them to build homes and establish businesses in the Fishers area.

Stoeppelwerth said I-Town reached out to Gray Eagle Golf Course owner and developer R.N. Thompson during their search for a site. Once company owners learned about the church’s mission, they insisted I-Town build the church on one of their properties, he said.

The owners said they plan to use proceeds from the property sale to build a new clubhouse elsewhere on the course.

Several residents of the adjacent Graystone neighborhood spoke against the development. Some cited concern over the viability of a course with no driving range.

Graystone resident Bob Jackson said none of his neighbors approve of the project and are worried I-Town wasn’t looking for a space large enough to support its growing congregation.

“I would think that since I can’t find anybody in Graystone that wants to approve this amendment, that would send a red flag up to both to the planning commission and the church,” Jackson said. “If I look at this very rapidly expanding church, I think they’re trying to build a church on a postage stamp when they should be looking for a mailing label.”

Others argued that the city’s long-term plan for land use, called the Fishers 2040 Plan, designates the Gray Eagle Golf Course and driving range as open space.

However, after public comments closed, Plan Commission members said the plan’s designation of the space was made only based on the land’s current use as a golf course and not meant to be binding.

I-Town supporters expressed the church’s continued dedication to reaching out to neighboring communities, citing town halls and neighborhood visits organized by the church

Steve Hardin of the I-Town building committee said the church has been trying to accommodate Graystone residents’ concerns by changing original plans for the site and allowing more green space between the homes of the neighborhood and a proposed parking lot.

I-Town’s primary plat request was unanimously approved by the Plan Commission, as was the ordinance amendment proposal with some stipulations.

A preliminary building design was presented publicly that shows a gray-and-white flat-roofed structure.

City Council member Pete Peterson said he would like to see a better attempt to match the architecture to the character of surrounding structures. He added he would also like to see a re-evaluation of I-Town’s current plan to repurpose existing structures on the driving range lot.

Peterson has been outspoken in his concerns of I-Town’s proposal. At Wednesday’s meeting, he made it clear that while he understood the spiritual benefits the church brings to the community, he would approach the proposal with the same consideration of any other development proposal.

“We look at this is a land-use matter,” Peterson said. “Is it the right thing for a community?”