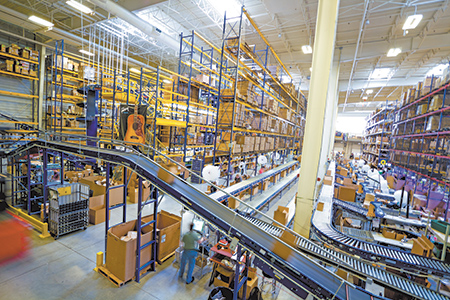 Sweetwater Sound has come a long way from its roots in the late 1970s in a Volkswagen minibus that doubled as a mobile recording studio.

As the nation’s largest online retailer of musical instruments and audio equipment, Sweetwater today maintains a 44-acre campus in Fort Wayne, where 1,200 employees help churn out more than $500 million in annual sales of guitars, keyboards, drum sets and sound boards.

One thing hasn’t changed: The driving force is Chuck Surack and his insatiable need to share a love of music.

The world-class saxophonist, who still plays in a nine-piece R&B band, started helping fellow musicians sound good in 1979, when he mixed the notes of church choirs from the back of his minibus.

A turning point came in 1985, when Surack discovered the revolutionary Kurzweil K250 synthesizer, which gave music lovers the power to add the sound of any instrument to their own tracks. He started making sounds for the likes of Stevie Wonder, Kenny Rogers and Dolly Parton.

Surack was hooked on helping musicians. Now he has 3 million of them—customers, that is. They range from rock stars to retirees to teenage YouTube hopefuls. They all get similar white-glove treatment from Sweetwater: 99.8 percent of the 5,000 orders per day ship the same day.

The company is known for its marriage of old-school music-store expertise with the speed and reliability of the very best online retailers.

“A lot of it is everyday people—it’s doctors, attorneys, accountants, factory workers—people who want to do music as a hobby,” Surack, 60, said in an interview with IBJ. “They play music for fun, at church, or in a band on weekends.” 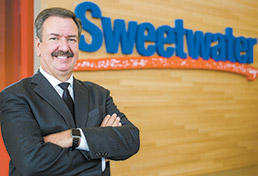 Chuck Surack, who owns Sweetwater Sound debt free with his wife, is a world-class saxophonist and still plays in a nine-piece R&B band.

It’s an enviable business: Margins are high (about 26.5 percent), the product mix is diversified (the largest vendor, the recording-equipment provider Avid, makes up just 5 percent of sales), and growth is steady (20 percent to 25 percent per year). Sweetwater stocks more than 700 brands. Last year, it sold 87,000 guitars and 100,000 microphones.

Surack owns 100 percent of the company, debt free, with his wife, Lisa. He reckons it’s worth at least $100 million, and he’s had plenty of suitors. Private-equity investors including Florida-based Sun Capital have tried to buy Sweetwater, Surack said, along with the likes of Guitar Center (the largest brick-and-mortar U.S. musical instrument retailer) and Amazon.

“It’s a nice, clean business, very diversified in the brands and customers,” he said. “It’s a big company, but we try to run it like a small business the best we can.”

One way is by never waiting for the phone to ring—80 percent of Sweetwater’s phone calls are outgoing, to tell customers about new products and discuss how best to deploy their gear.

Products are rarely out of stock, and the company turns inventory an average of every 30 days. Employees are empowered to go the extra mile, including with touches like adding candies to outgoing shipments.

One customer thought he would push Sweetwater’s customer-service reputation to the max, requesting a dragon drawing on a shipping box, and an art-minded employee obliged, said Michael Eikenberry, the company’s former banker and chairman of Fort Wayne’s English Bonter Mitchell Foundation.

“Their culture is so unique,” Eikenberry added, noting the Sweetwater headquarters features a full gym with trainers, barbershop and beauty salon, golf simulator, pingpong and billiards tables, and a cafeteria open to the public.

Sales engineers must complete 13 weeks of training—including 300 classes taught by 80 different teachers—before they can interact with a customer.

“We feel they’re either adding credibility to our company or taking it away, and I can’t risk them taking it away for a brand we’ve worked so hard on,” Surack said.

More than half of Sweetwater’s employees moved to Fort Wayne. So here’s a pitch Surack makes a lot: The northern Indiana town has a great arts scene and minor-league sports; close proximity to Chicago, Indianapolis and Detroit; and is a great place to raise a family. The company last year gave $3 million to charities, most of them local.

It would have been easier to build the business in Los Angeles, but Sweetwater would not have enjoyed the same shipping speed (based on central geography) or the “Midwest work ethic” of its employees, Surack said.

In 1983, he was playing in a band called Misty Moods and helping friends with equipment when he decided his fledgling business needed a place to call home, a modest 1,000-square-foot building with a creek (named Sweetwater) in the back yard. The company could have just as easily been named Chuck’s Recording Studio, he said.

There are plenty of Sweetwaters—bands, towns, bed-and-breakfasts—but Surack was first to buy sweetwater.com, and the rest is history.

The company still has room to grow: The music-products industry is a $17 billion global business, according to the National Association of Music Merchants. The U.S. behemoth is the private-equity-owned Guitar Center, with 300 stores and more than $2 billion in annual sales.

It’s a good business: Musical equipment has mostly avoided the margin pressures of consumer electronics that felled the likes of HHGregg. Some music-mixing software is now cheap, or free, but that’s actually opened up the sale of accessories to a larger customer base, Surack said. Even as prices on recording equipment have come down, most manufacturers use minimum advertised pricing, which keeps discounting in check.

The democratization of the music industry—wrested from the hands of studio gatekeepers—also has been a boon to Sweetwater.

“It empowers the end user—[if] they have the dream or the idea and vision, they can produce their own music and put it on the internet,” Surack said. “People are buying equipment to fulfill their dream of being discovered.”

Surack has eclectic musical tastes, from jazz and pop standards, to modern hip-hop, to R&B, to whatever his 10-year-old daughter is enjoying. Each of his radio pre-sets in his car sends him to a different genre. 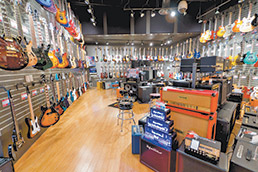 These days, Surack worries about rising health care costs and the potential for rising interest rates, which could hinder customers from getting loans to buy Sweetwater products. But those issues are mostly out of his control. For those he can control, there’s kaizen (the Japanese philosophy of continuous improvement).

“Chuck has shown a phenomenal ability to scale his own leadership capabilities as the company has grown,” said Osterman, who also helps run ancillary businesses, including auto and aviation businesses and an eyeglass startup.

“Oftentimes, when companies get big, they get to the stage where the person who started it up isn’t the person who can take it to the next level,” Osterman added. “It’s tremendously impressive how he’s put the needs of our customers and the needs of the team first and done whatever it took to make the company successful.”

For a brief period, Surack didn’t own all of Sweetwater. In 1997, he sold an 80-percent stake to a capital fund. Four years later, he bought it all back, with loans from 20 friends and a local bank (Tower, now part of Old National)—all of whom he paid back in three years.

He said the company isn’t for sale, and he has no plans to take it public. Such a move would put the focus on quarterly results instead of customers and employees: “It makes money for the top few people, but I don’t want or need more money at this point,” he said.

Surack has no plans to retire, noting his grandfather lived to 95. Ultimately, he’d like the business to stay in the family; he also has two stepsons in their 20s.

“I’ve never had to work a day in my life, so why would I retire from that?” he said.•