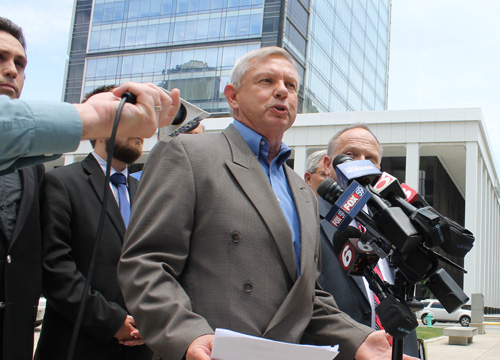 The Indiana Transportation Museum has notified officials from Hamilton County, Noblesville and Fishers that its intends to file a federal lawsuit accusing the government of unjustly interfering in the museum's operations, causing it a critical loss of more than a half-million dollars in revenue.

The Noblesville-based not-for-profit museum said it filed the tort-claim notice Friday afternoon. The notification was sent to the leaders of the Hoosier Heritage Port Authority, the mayors and deputy mayors of Noblesville and Fishers, all three Hamilton County commissioners and several other county officials. It also was sent to Gov. Eric Holcomb and Attorney General Curtis Hill.

“We have tried to find ways to work with these entities and our efforts have not been successful," John McNichols, the museum’s board chairman, said Friday afternoon at a press conference. "Our efforts have been met with indifference and opposition.”

The museum and area officials have been wrestling over the future of the 37-mile railroad for months. Noblesville and Fishers seek to convert a section of the rail corridor into a 14-foot-wide pedestrian trail, but the museum wants the rails to remain so it continue to operate trains on them.

The Hoosier Heritage Port Authority, the quasi-government entity that oversees the railroad, terminated its policy-of-use agreement with the museum in March 2016, citing concerns about the museum's financial condition, maintenance and safety conditions of the tracks.

The tort-claim notice, which museum officials made public Friday afternoon, said the museum lost more than $350,000 in revenue because it couldn't operate the Polar Bear Express. It also says it lost another $150,000 when it was prohibited from operating the Indiana State Fair Train.

The museum said it has agreements to operate the excursions with Fishers, Noblesville and Hamilton County, which together own the Nickel Plate Railroad. The notice says the museum was “current on all terms and conditions” of the operating agreement with the port authority at the time it was prevented from using the tracks.

The museum's notice said the actions by the government officials denied its rights under the Fourteenth Amendment and the Fifth Amendment.

Local officials defamed the museum, interfered with an established business, breached an agreement, failed to engage in fair dealing, failed to comply with the Indiana Open Meetings and Records Act, and engaged in abuse of process, according to the notice.

Officials from Fishers and Noblesville declined to comment. Rhonda Klopfenstein, president of the Port Authority, did not respond to IBJ’s request for comment.

The port authority recently issued a request for proposals for a new operator of the track, and responses were due Tuesday. Four groups submitted responses—the transportation museum, the Indianapolis Metropolitan Railway Co. of Indianapolis, Hoosier Heritage Railroad Inc. of Fishers and Nickel Plate Heritage Railroad of Arcadia.

The museum contends it won’t be given a fair chance. A media advisory issued Friday morning by the museum said the lawsuit it intends to file will focus on the “biased RFP process.”

McNichols said he hoped the parties involved could come to an equitable agreement before the Indiana State Fair begins Aug. 4. The authority has said it will not make a decision in time for an operator to offer the fair train this year.