The downtown Indianapolis Colts-themed restaurant abruptly closed on Tuesday without explanation from ownership. 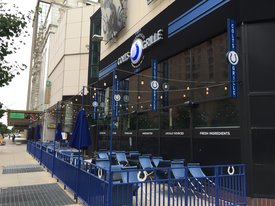 A message on the Indianapolis Colts Grille website thanks patrons for their support during a six-year run in Claypool Court, a retail and hotel center at 110 W. Washington St., near Circle Centre mall.

Owner Howard Shiller of Fort Lauderdale, Florida, could not be reached for comment. He is a food-service veteran who has developed other sports-themed restaurants. A phone number listed for his company, Celebrity Ventures, is out of service.

IBJ Dining Editor Lou Harry reviewed the restaurant in September 2011, not long after it opened.

The closing of the downtown grill leaves the Indianapolis area without a Colts-themed restaurant.

Blue Crew Sports Grill, which had been in business at 7035 E. 96th St. on the northeast side for seven years, closed in 2013 after owner Randy Collins accumulated $75,000 in unpaid rent.

The restaurant was outfitted floor to ceiling with Colts memorabilia, big-screen televisions and a huge horseshoe-shaped bar.