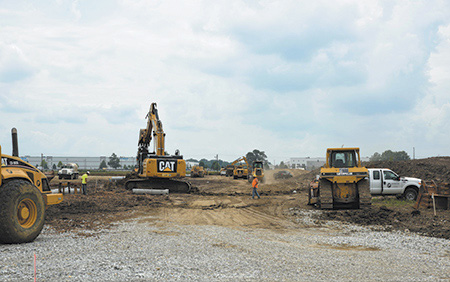 Whitestown has been deluged the past two years with announcements, groundbreakings and ribbon cuttings for manufacturing and distribution companies.

Ten industrial buildings have been completed within the past 24 months, another three are under construction, and four projects are in the process of getting started.

“That’s unheard of,” Whitestown Town Manager Dax Norton said. “I don’t know where else you’re going to find that. I really don’t.”

Becknell Industrial has acquired or built more than 600,000 square feet since entering the Whitestown market in 2015.

And another 3.25 million square feet are on deck between build-to-suit projects and developers investing in speculative facilities.

Developers and the companies occupying these large buildings say the Boone County suburb’s access to Interstate 65 and proximity to Indianapolis are big draws—and retail growth is making the area rich with amenities.

IBJ.COM EXTRA
This map shows how the Interstate 65 corridor has exploded with growth since 2016.

Plus, residential growth—Whitestown has been the fastest-growing community in the state for six years—is making it easier to find employees. That’s a big perk given the state’s low unemployment rate of 3.2 percent.

But the northwest industrial market—while the Indianapolis area’s second-largest, with 55.4 million square feet—still lags behind Plainfield and the rest of the southwest side, which has 77.6 million square feet of inventory, according to Colliers International.

Jason Speckman, an industrial broker at the local Colliers International office, said the I-65 corridor is growing quickly but has “a ways to go” to catch up to Plainfield, home of the metro area’s three largest industrial parks.

“It’s going to continue to see significant activity. We’re observing in the marketplace what occurs to be a pent-up demand for newer product from companies that have occupied some of our traditional warehouse space for years,” Speckman said. “But the southwest, I think, is still growing at the fastest pace.”

Some say the growth in Whitestown was inevitable because it’s the most logical extension from the northwest side of Indianapolis, site of Park 100, the region’s largest office complex and the fourth-largest industrial park.

Park 100 has 4.1 million square feet of rentable space, but is 97 percent occupied, according to IBJ research.

“As those companies grow and want newer, more modern facilities, there aren’t opportunities in Park 100,” said Pete Anderson, executive vice president of investments for Becknell Industrial. “They want to go to the next-closest thing, and that really is Whitestown.”

The growth won’t mean an immediate financial boon for local governments, however. All the recent developments have had some tax break attached to them: Companies moving to Whitestown and developers building the facilities are on track to save a total of more than $22 million in taxes through various incentive deals.

Norton said he believes the town is getting a good deal, though.

“Tax abatement has become not just icing on the cake but a vital ingredient in the cake itself,” Norton said. “It’s so very much expected across the country now—not just in Indiana—that if you don’t offer it, you may very well get no investment.”

The developers agree. While the tax incentives offered by the town weren’t necessarily critical to every project, the agreements certainly help sweeten the deal.

“Without it, you’re immediately put at a competitive disadvantage,” GDI Construction CEO Terry McCardwell said. “You’re just not going to be able to lease your space at the rental rates that you need to lease it at for the investment to make sense.”

Both sides of the road

Browning/Duke has been slowly building out its AllPoints at Anson, but now the pace seems to be picking up.

“It was definitely quiet for a few years coming out of the recession,” said Mark Hosfeld, vice president of leasing and development for Duke. “Whitestown has really put itself on the map. It’s a submarket in Indianapolis that is really a legitimate submarket now.”

And a new headquarters for Indianapolis-based commercial furniture manufacturer Facility Concepts Inc. is under construction at the park.

But the activity isn’t limited to Anson.

Anderson, of Becknell Industrial, estimated the company has $50 million to $60 million invested in the Whitestown area—all on the west side of I-65.

In 2015, it invested $24 million to construct the company’s first two speculative buildings on Indianapolis Road between Perry Boulevard and Performance Way. Those are now occupied by Cummins Inc., Stephen Gould Packaging and Alliance HealthCare Services.

“We’re probably more bullish on Whitestown than some of the other submarkets in the city,” Anderson said.

Also on the west side of the interstate, Exeter Property Group has a 440,000-square-foot warehouse under construction on Perry Boulevard. The building, which would be part of the company’s proposed Whitestown Business Park, is expected to be finished by Nov. 1.

Exeter plans to eventually build 1.74 million square feet at the location for a total investment of $45.6 million, according to tax abatement records. The space would be equivalent to more than 30 football fields.

The company has invested in other parts of the Indianapolis area, including in Park 100, but recently turned its attention to Whitestown.

“Activity is high as far as prospects in the market, and there’s limited availability up in Whitestown right now, so we felt like now was a good time,” said Andrew Brown, asset manager for the mid-south region of Exeter. 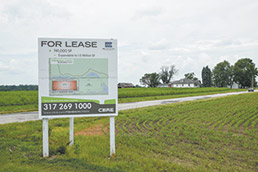 The town has nearly 30 active tax abatements for ongoing and recently completed projects.

Most of the incentives involve a tax break on the value of real property (the actual land and buildings), but several include deals to phase in taxes on personal property (generally equipment and supplies) the companies are adding to the facilities. Some projects—where the tenant is or will be leasing the space—have both types of abatements.

Whitestown offered AmerisourceBergen a 10-year personal-property tax abatement on the $26.5 million in equipment it installed, which could save the company $1.27 million during the 10-year period.

The town also agreed to a 10-year tax phase-in deal with DCT Industrial, which constructed the facility for AmerisourceBergen, that is estimated to be worth $1.5 million.

Browning/Duke also regularly receives real-property tax abatements for its buildings at AllPoints at Anson—sometimes applying for them years in advance.

For example, Whitestown approved a 10-year deal for a building in Anson in 2008 that Browning/Duke didn’t start construction on until last year. The abatements don’t kick in until the facility is built. The distribution center is now occupied by Daimler.

Norton said the investments wouldn’t have occurred without the abatements, so the town is already receiving more in taxes than it would have otherwise.

But he said the town is becoming attractive enough that it can be slightly more selective in deciding what companies will receive the tax breaks.

“Our marketing effort is pretty easy right now,” he said. “We’re a very business-friendly community. We’re willing to listen to and approve a tax deduction application… . And that’s gotten around and people know that.”

“It’s critical because the overall Indianapolis marketplace for new buildings does provide that 10-year gradual tax abatement,” Hosfeld said. “If they didn’t offer it here, [developers] would more than likely go somewhere else.”

Growth along the I-65 corridor isn’t expected to slow, as several projects have already received the green light from Whitestown.

Construction on the first building could start within a month or so, and McCardwell said it isn’t necessarily waiting to have tenants lined up.

“Whitestown has been pro-growth, and they’re doing a lot of the right things to make this kind of development feasible,” he said.

Seattle-based Brooks Sports Inc. could invest $15 million in a 400,000-square-foot distribution center at Anson, but the running-gear retailer has not officially committed to the area yet.

Whitestown has approved an incentives package worth $2.35 million to try to lure the company.

“We continue to be bullish,” Anderson said. “That’s a major commitment on our part. We have to feel pretty good about it to spend that kind of money.”

And Anderson said he thinks the company would buy more land if given the opportunity.

“If you’re willing to buy ground and hold it, you must be pretty optimistic about what’s going on,” he said. “Ground itself doesn’t get you any return until you put it to use.”

Norton said he also has six unannounced projects in the pipeline.

“It’s definitely unprecedented I would say,” he said. “It’s, dare I say, crazy.”•