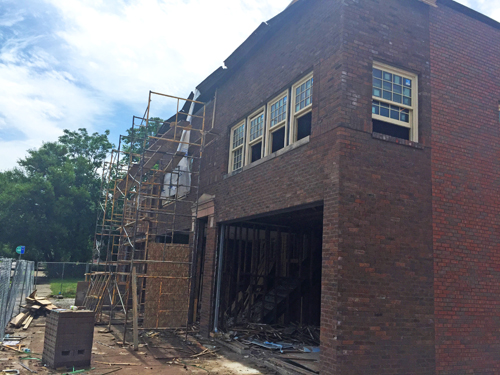 The historic commercial structure at 1834 N. Central Ave. in the Herron-Morton area is getting an overhaul and new use as part of an $18.4 million project that will bring 60 condominiums to the neighborhood.

Local developer Onyx+East is constructing the condos on 2.7 acres on the north end of the block bordered by 19th Street to the north and Central Avenue and New Jersey Street to the east and west. But the company is making an even bigger commitment there by bringing its headquarters to the vacant, brick building on Central.

“We liked being in a neighborhood that’s growing and changing,” said David Leazenby, Onyx+East’s vice president of product and growth. “Here’s a location where we could set up our headquarters right next to our product.”

Onyx+East in June 2016 spun out of prolific apartment developer Milhaus Development LLC, which began testing demand for condominiums in 2015 with its Park 10 project at East 10th and Broadway streets.

The upstart company since has begun working on other condo projects and has grown to 18 employees, prompting the need for it to leave the security of Milhaus’ headquarters on Virginia Avenue in Fletcher Place.

Onyx+East bought the building on Central Avenue in March from a local family and has received approval from the Indianapolis Historic Preservation Commission to begin its $1.6 million renovation of the vacant structure.

Passersby will know the brick building, which really is two structures, by the “Peter Pan” inscription on the south end of the façade. That portion was once a movie theater and dates to at least 1915. The northern two-story section was built in 1923 and originally housed a grocery story on the ground level and two apartments above.

Onyx+East hopes to move in October and plans to take 6,000 square feet, leaving 1,200 square feet on the north end for lease.

The entire building has been gutted and the crumbling sides replaced, leaving just the front façade as the only original piece of the structure left standing. New windows that match the old ones will help preserve its historic look.

“We’re trying to maintain the historical character of the building,” Mark Demerly, the architect on the project, said. “Framing wise, it still had good integrity to it.”

To the north of the building along Central Avenue, Onyx+East will build 24 condos as part of a $6.8 million first phase that is ready to start “any day,” Leazenby said.

The 36-unit, $10 million project (click rendering below for larger view) will be built where a sprawling 55,000-square-foot office and warehouse building now sits that is occupied by the McGuire Scenic Inc. company, which builds stage sets mostly for corporate productions.

The second phase of the project would include 36 condo units. (Renderings by Rottmann Collier courtesy Onyx+East)

Onyx+East is buying the building from Laura Perlman, who owns it and the company along with husband Lester McGuire. They’ve been at the New Jersey Street location for 17 of the business’s 22-year existence.

“Since we moved in, we’ve really grown,” Perlman said. “And the neighborhood has really changed, and [Onyx+East’s] proposal was very attractive.”

Perlman is unsure where she and her husband will move McGuire Scenic. But once it’s gone, Onyx+East will demolish the building except for the original two-story, 1890 structure that is surrounded on both sides by newer additions.

The building originally housed carriages pulled by the horses that were kept across the street, said Todd Rottmann, the architect for the full 60-unit project.

“The difficulty with that building is that the first floor is completely gone and covered up,” he said. “Unfortunately, there are no historic photographs of what the building looked like. So, we’ve researched similar buildings of that time period and recreated a first-floor storefront of what it may have looked like.”

Onyx+East will convert the building into two condos totaling 1,200 square feet each, with 34 newly constructed units surrounding the building on the 1.7-acre site.