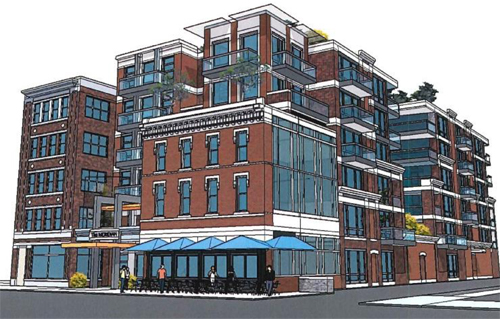 The owner of a historic building just three blocks from Monument Circle and across South Meridian Street from Circle Centre mall wants to demolish most of the structure to make way for a condominium development.

The project would stand six stories and blend new construction with old by incorporating the façade and another portion of the original building at 119 S. Meridian St. The project also would occupy a narrow property immediately to the north that currently is used for surface parking. 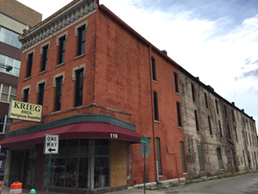 The store would close under new plans for the building and be replaced by updated retail space on the ground level. Office space would occupy the second and third floors, with 21 to 24 condo units taking the top three levels.

The O’Connors told IBJ they are aware of the plans to redevelop the building and are hopeful they can find a new downtown location for their business.

On Aug. 16, project representatives presented plans for preliminary review to the Indianapolis Historic Preservation Commission. Members provided feedback on the proposed development but took no action.

Commissioners said plans to demolish most of the building—leaving just the façade and a piece behind it—probably wouldn’t fly, even though the building is rife with structural problems.

“I would hope that we could have enough of the old building remain that it doesn’t appear to be a façade-ectomy,” commissioner Jim Kienle said. “You’re not really doing preservation, and that’s our charge here, to look out for, and conserve, these resources.”

The Krieg building, the narrow surface lot and the five-story building to the north of the lot at 111 S. Meridian St. all are owned by groups led by Coombes. The latter property is the former home of Brenner Luggage, which now is occupied by Good Games.

Coombes could not be reached for comment about whether that building would be incorporated into the Krieg building project.

Arsee Engineers Inc. in Fishers, hired by the ownership group to determine the Krieg building’s condition, deemed it “unsafe and unstable.”

The engineering firm concluded that the building’s load-bearing walls (north and south) and center line of columns are showing signs of failure, with a significant bow to the north of about 13 inches, according to one assessment.

Repairing the structure could cost as much as $2 million, not counting additional expenses, such as storefront repairs and window and roof replacement, to get it to a leasable condition, the report said.

The building was constructed in 1879. One of the oldest tenants was the Kipp Brothers distributor of novelty toys and party favors, which occupied the building from 1901 to 1948. It moved a block south on Meridian, and ultimately to Carmel in 2001.

The lot to the north of the Krieg building has been vacant for more than 100 years and hasn’t had a building standing on it since 1914.

What makes the Krieg building unusual is its narrower-than-normal physique extending a half block, from Meridian to South Sciota Street to the east. Because of the building’s pronounced length, commissioners hope more of the building can be saved than what the ownership group is suggesting.

The group is expected to return to IHPC in November to formally present its plans. It has hired Ratio Architects to design the project, which was not involved in the conceptual drawings.