The new owner of a prominent office building in midtown Indianapolis has reinvigorated the once-staid space with a massive makeover aimed at attracting more tenants to a location vacated by a major insurance carrier. 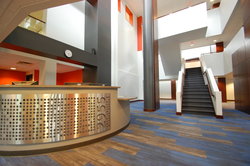 County assessor records show the building and its nearly nine acres sold in July 2016 for nearly $5.3 million to 2955 Meridian LLC—an investment group also based in Columbus.

Representing the investment group, Todd Kemmerer, a principal at Columbus-based property management firm Capitol Equities, declined to divulge how much the group spent on the interior improvements. But they’re highly visible throughout much of the space.

The 190,000-square-foot building and its grounds encompass an entire city block on the east side of North Meridian. It sits just south of the Children’s Museum of Indianapolis and north of the Lilly Endowment Inc. and Ivy Tech Community College campus.

The building was the home of the Indianapolis-based Meridian Insurance Group until State Auto acquired the property-and-casualty insurer in June 2001. Meridian, founded in 1953, built the headquarters in 1960.

With $445 million in assets, Meridian Insurance was the city’s fourth-largest property-and-casualty insurer before State Auto’s acquisition.

State Auto still occupies the north side of the building. But roughly 50,000 square feet on the south side has been taken by the United Way of Central Indiana and the statewide Indiana United Ways. 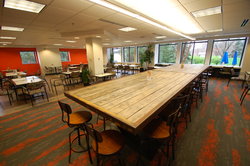 Both agencies moved from their longtime home farther north at 3901 N. Meridian St. The United Way of Central Indiana sold the five-story building in April 2016 for $1 million to local developer Flaherty & Collins Properties.

Flaherty & Collins has plans to co-develop the vacated property with community development group Midtown Indianapolis Inc. by converting the 1969 structure into 70 mixed-income apartments with up to 15,000 square feet of street-level office space. The project is part of a larger, $32 million development that will bring a grocery store and about 140 apartments to a neglected stretch near 38th and Illinois streets.

“One of the important things for us is that we felt we belonged in the center core of the community, and we were really trying to have a more collaborative, open work environment,” she said. “That was a big piece of it, and the amenities were really nice for us.”

The building offers on-site parking and now a host of services and features that either weren’t available or have been upgraded by new ownership. They include a bicycle-sharing program, fitness center, cafe, game room, security desk, meeting space and outdoor patio, in addition to new furniture and carpeting throughout.

The modern feel and the addition of more natural light have helped to transform the space, said Rich Forslund of Colliers International, the leasing agent for the building.

“Everything was very tired [with] a lot of dark woods,” he said. 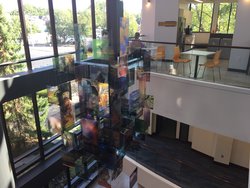 Highlighting the space is a hanging piece of artwork that spans the top two floors called Planet Earth, done by Melbourne, Australia firm Yellow Goat Design. It’s one of just five in the world and only two in the United States, with the other in Los Angeles.

Though the design of the artwork is similar, the images featured on the panels are different on each of the five pieces, said Kemmerer of Capitol Equities.

“We thought it was just perfect for the building,” he said.

The building’s ownership finished renovations in August, about the time Indiana United Ways moved in.