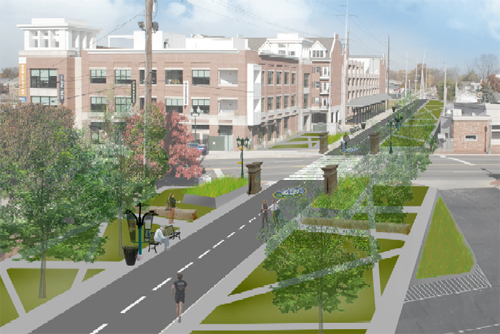 A Missouri-based law firm that specializes in rails-to-trails cases plans to file a federal lawsuit on behalf of property owners along the Nickel Plate Railroad corridor.

In July, officials who control the 37-mile railroad corridor voted to move forward with a plan that will likely put an end to future train traffic from Indianapolis to Hamilton County.

The decision paved the way for Fishers and Noblesville to convert a 9.2-mile stretch of the railroad into a multi-use pathway. The proposed $9 million Nickel Plate Trail would run from 96th Street in Fishers to Pleasant Street in Noblesville.

But before that portion of the railroad can be ripped up for the pedestrian and bicycle path, officials need to receive rail banking approval from the federal Surface Transportation Board—a step that is now being pursued.

If the federal board signs off on the request, which essentially protects the right-of-way for future transportation uses, then legal action will likely soon follow.

Stewart, Wald + McCulley LLC, which has offices in Kansas City and St. Louis, has already started talking to landowners along the railroad about their rights as property owners and is prepared to file a lawsuit against the federal government if and when the rail banking request is approved.

Fishers, Noblesville and Hamilton County share control of the corridor, but property owners adjacent to it actually own the land underneath the tracks, according to Steve Wald, partner at at the law firm.

Wald said if the federal government allows local entities to change the use of the land, doing so violates the rights of those property owners, entitling them to a settlement.

“You can’t take private property without paying for it,” Wald said.

He said the lawsuit would be filed in Washington, D.C., against the federal government—not the local municipalities—because the rails-to-trails program and rail banking process was created at the federal level.

“We have no quarrel at all with the local government entities,” Wald said. “They are acting legally. They are acting appropriately to use that land to benefit the local community. Our lawsuit will be completely neutral toward the trail.”

He said they have several dozen landowners already involved and hope to get hundreds more. The firm typically sees about 80 percent to 90 percent of property owners join cases, and he estimated there is about 1,000 along the Nickel Plate corridor that will be affected.

“The law is very much in our favor,” Wald said. “We think we’re going to win this one.”

The compensation each property owner could receive would vary based on how much land they have around the railroad and what land values are in the area. For example, residential property in Noblesville would have a different payout than industrial property in Indianapolis.

Wald said his firm has handled lawsuits that resulted in more than $100 million in total being paid to property owners, but also pursued a case for one property owner that collected $900. He estimated this case could total tens of millions of dollars.

His firm plans to continue to reach out to property owners during the next few weeks.

Wald said his team works on a contingency basis, and if it is successful, the federal government pays the legal expenses.

“We’ve been super happy with the turnout and participation level so far,” Wald said.

According to the plan for the corridor chosen in July, only a small portion of the railway will be used for trains. Arcadia Arts & Heritage Depot and Atlanta Pacific Railroad LLC were picked to operate tourism trains only on the northern portion of the corridor—an 8.5-mile stretch from Arcadia to Tipton.