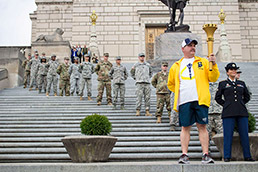 The Indiana Bicentennial Torch Relay traveled 3,200 miles around the state before finishing its journey in Indianapolis. (Photo courtesy of Sadie Lebo/Ball State University )

One of the judges said about the torch relay: “The idea of uniting the entire state and bringing together citizens of every age, race and background to carry a physical object throughout the state is interesting enough, but the partnerships and execution really elevated this campaign.”

“The torch relay was a great opportunity to promote and unify the state by connecting people, communities and regions,” tourism department Executive Director Mark Newman said in a statement. “This award is a tremendous honor. The effort, dedication and teamwork that went into more than three years of planning was worth the journey.”