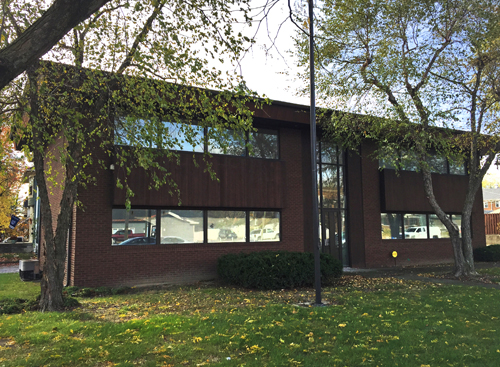 Foster Engineering Co. Inc. in Irvington stopped operating at least 30 years ago following its owner’s death, but the sign in front of the vacant building that housed the company’s office still stands today.

The prominent sign at the southwest corner of East Washington Street and North Arlington Avenue finally will be coming down soon. The owners of Irvington marketing firm Lodge Design Co. bought the building in January and are finishing renovations, with plans to move in by the end of the year.

“It was almost frozen in time,” said Margaret Lawrence Banning, executive director of the Irvington Development Organization, of the building. “The Foster Engineering sign has been out front all these years.”

The widow of the company’s owner held onto the property for several years, without bothering to sell the two-story, 3,800-square-foot structure or at least find a replacement tenant.

In January 2014, she finally sold it to Muesing Witmer Development Co. LLC. The local developer, in turn, handed it off to Lodge Design three years later, after failing to attract tenants.

Lodge Design paid about $400,000 for the building, said Jarrett Hagy, who co-founded the 10-employee firm in 1999 with Jason Roemer. They’re spending roughly $100,000 to renovate the interior, which hadn’t changed since the mid-1980s, Hagy said.

“We liked the idea of owning our own property,” he said. “We liked the location, and there aren’t that many options to buy in Irvington.”

Lodge has operated since its inception from the Irvington Masonic Lodge building, hence the firm’s name. It's just to the west of its new location, at East Washington Street and Johnson Avenue.

The building the firm bought is a bit smaller than the space Lodge now occupies, but it will be much more functional, Hagy said.

The carpeting and drop ceilings have been ripped out, and a new heating and cooling system installed.

They’ve torn out the middle portion of the second floor to create a two-story atrium. The two second-floor wings on each side of the atrium will be connected by a steel-grate catwalk.

“It was really cut up and small,” Hagy said of the building. “We wanted to really open it up. That’s where this giant hole comes in.”

The first floor will feature two conference rooms, gathering space, and a bar and kitchen, while the second level will be work space. New drywall, wiring and plumbing also have been installed.

The architect on the project is locally based One 10 Studio.

The Masonic Lodge Building, where Lodge is located now, is for sale. That prompted Hagy and Roemer to considering buying their new headquarters instead of leasing.

“There’s always uncertainty with that,” Hagy said. “You’re sort of behind the 8 ball.”