Indiana Gov. Eric Holcomb says he has opinions on major issues that are up for debate in the Statehouse and at the federal level but doesn't feel obligated to weigh in unless they directly relate to his legislative priorities. 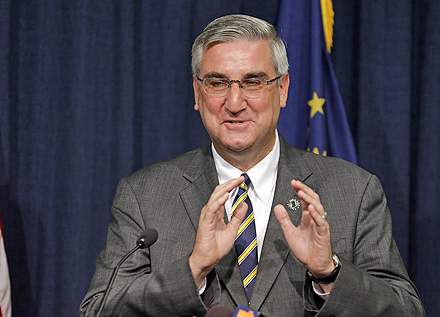 "I'll get a lot more done carrying on with that approach," Holcomb said Friday during an interview with The Associated Press. "You get more done if you don't chase every issue of the day."

Since taking office nearly a year ago, Holcomb has ducked substantive policy questions about everything from abortion and gun rights legislation, to federal health care policy or whether Indiana convenience stores should be able to sell cold beer.

It's an approach that borrows heavily from his predecessor Mike Pence, now the vice president, who often relied on vague talking points to avoid taking a stand on legislation.

Holcomb, though, is different from many of his predecessors because he has a limited public record to be judged by. His 2016 election was the first time he successfully ran for office.

Democratic Rep. Ed DeLaney says Holcomb is using an "interesting" yet "irresponsible" strategy that allows him to be everything to everyone.

"It's working," said DeLaney, of Indianapolis. "How can he have any negatives if you don't know who he is, or what he stands for?"

Independent analyses later concluded the program, which Holcomb has championed, stood to lose millions in the coming years, if not billions.

Holcomb brushes off any criticism and says it's not his place to tell Congress or the Statehouse how to act.

"I have opinions on these things. I am a Hoosier," Holcomb said. "I'm happy to talk with [lawmakers] … but that doesn't mean that I'm going to start assuming a legislative role."

He says that enables him to focus on issues he cares about. But it also lets him to avoid taking losing positions with lawmakers—or voters.

Still, there are also some divisive issues for some GOP lawmakers that he has taken up, including his successful push to boost preschool funding and a law that now allows local governments to establish needle exchanges.

Whether package liquor stores should maintain their stranglehold on cold beer sales is an issue destined to come up in the legislative session beginning Jan. 3. It's also one Holcomb is steering clear of.

By staying in his lane, he avoids running afoul of fellow Republican Statehouse leaders. They have historically sided with liquor store owners, who have lobbied aggressively against change while donating generously to lawmakers' campaign funds.

Public opinion surveys indicate widespread support for changing the law. But Holcomb says he is "laser focused" on his own agenda. Indeed, last year lawmakers approved much of the legislation he sought.

"I think we should be modernizing our state liquor laws, but I leave it to them to have the discussion and flesh out the details," Holcomb said Friday. "… We have very good relations … in both chambers, on both sides of the aisle. Because they, too, appreciate that I have an agenda."