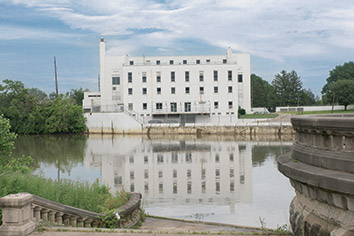 Leaders of the push to convert a former naval armory on the west side into a second campus for Herron High School have cleared a major hurdle by completing a financing package to fund the $10.3 million project.

The package includes a host of financing tools: federal new markets and historic tax credits generating more than $4 million in equity, in addition to $3 million in private contributions, $1.5 million in tax-increment financing funds and a $1.3 million grant from Indiana Landmarks.

That leaves leaders about $500,000 short but with plenty to continue renovations that began in July, long before the financing package was completed last month.

“We used equity from the donations [to start renovations], and then we needed to close the financing,” said John Watson, a local developer and Herron director. “It was a huge leap of faith to do that. I was very relieved when we got [the package] done.”

Herron directors hope to raise the remaining cash through fundraising efforts. The college preparatory charter school at East 16th and Pennsylvania streets received approval in June 2016 to rezone the 4.6-acre site on the White River at West 30th Street for the second school.

It plans to welcome students in the fall of 2018 under the Riverside High School banner. The school already is operating in a temporary location on West 30th street, about a mile from the armory building.

About 140 freshmen who comprise its lone class so far will move into Riverside in the fall as sophomores. The new school also will welcome a freshman class. It will advance students and add new freshmen classes until ultimately graduating a senior class. At full occupancy, Riverside should boast about 600 students, or 150 per class, Watson said.

The goal is to have a mix of at-risk and middle-income students, he said.

Riverside will adhere to the same curriculum and core values as Herron High School. Both schools will be operated by the same board of directors and leadership.

Riverside’s 70,000-square-foot armory building was completed in 1938 for $550,000 and serves as a west-side landmark standing at attention on the east bank of the White River. It originally was known as the Indianapolis Naval Reserve Armory but was renamed in 1964 for Capt. O.F. Heslar, the armory’s first commanding officer.

The building has been vacant since the departure of Navy and Marine Corps reserve units in early 2015. The city inherited the site after the state found no interest in the property from its agencies.

“Not many people have been in the building, because it’s been a government facility,” Watson said. “It’s been a mystery since its creation.”

One of the most iconic features of the armory is the two-story concrete room that resembles the inside of a submarine, complete with a ladder stretching to the heavy steel latch that closes above. Training involved repairing a blast hole in the side of the wall while the room filled with water. While the room serves little purpose for a high school, Herron nonetheless is converting it into a small museum to display armory memorabilia.

The biggest asset of the building is the gymnasium, Watson said, because Herron doesn’t have one at the East 16th Street campus, leaving the school to forage for availability throughout the city.

Watson, a local developer who has rehabbed several historic buildings, including converting the former Bush Stadium into the Stadium Lofts apartments, has used tax credits several times to help finance his projects.

But putting the package together for Riverside High School proved quite challenging, considering all the different options employed, he said.

“It was by far the most complicated deal I’ve ever been involved in,” said Watson, noting that 283 separate documents were created for the closing of the deal.

The $3.3 million in equity Herron received from the city in new markets tax credits came from the $55 million in credits the city secured in January 2017 from the U.S. Department of Treasury to help fund “transformative neighborhood projects.”

The Herron project so far is the biggest using the credits that has closed.