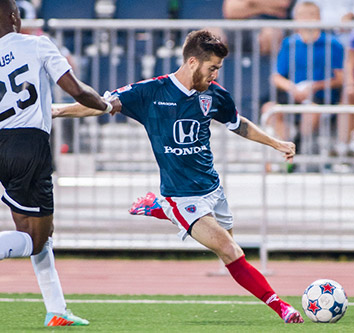 The Indy Eleven will play its home games rent free at Lucas Oil Stadium and the city and team will each pay part of the operating expenses at the city-owned venue.

The details of the one-year deal are still being worked out, said Capital Improvement Board President Melina Kennedy after a Monday press conference.

It’s not clear yet, Kennedy told IBJ, what share of the operating expenses the city will pay versus what the team will pay to play most of its games at Lucas Oil, rather than IUPUI's Carroll Stadium, which has been its home. Kennedy said the deal will be finalized “soon.”

“We’re still working through the cost-sharing agreement,” Kennedy said. “We think the exposure that the Indy Eleven bring to Lucas Oil Stadium will be good not only for the venue but the city as well.”

The Eleven may still play one or two of its games at its old home on the IUPUI campus due to scheduling conflicts at Lucas Oil. IU officials were present at Monday’s press conference.

Eleven President Jeff Belskus told IBJ he expects the team's cost to play in Lucas Oil will be similar to that of playing in the antiquated Carroll Stadium. The Eleven were paying a high five-figure to low six-figure sum per game to play at Carroll, Belskus said. And he noted that in Carroll Stadium, the team had to rent things like grandstands and the sound system for each game.

To keep costs down, The Eleven will only use two entries—north and south end—and likely curtain off the top sections of the stadium.

“We expect 16,000 for our home opener March 31 against Cincinnati,” Belskus said. “We think our fan base is going to be very excited and FC Cincinnati drew 22,000 per game last year—and they travel—so we expect a number of them will be coming here.”

That crowd size never would have been possible at Carroll Stadium, which can accommodate fewer than 11,000 for soccer.

The Eleven have played its home games at Carroll Stadium since its first season in 2014 and have been in the top two in attendance in the North American Soccer League each season. Last year, the team averaged about 8,500 fans per home game—tops in the NASL. But team officials complained that lack of amenities—including permanent restrooms and concession stands and a covered concourse—hurt the team’s drawing power. Several times during their time at IUPUI, the venue had to be evacuated due to thunder storms.

That won’t be a problem at Lucas Oil Stadium.

“This is a first-class venue that our fans will really embrace,” said Indy Eleven owner Ersal Ozdemir. He said the venue’s amenities from concession stands to locker rooms are among the best in the Eleven’s new league, the United Soccer League.

“Obviously, this is a premiere venue,” Papadakis said. “It takes the team’s game experience to the next level. This venue has tremendous sightlines and we think the environment can be made intimate.”

The Eleven are eager to play in the stadium with the roof open. Belskus noted that the USL has no rules concerning roof openings and closings, meaning the Eleven could start a game with the roof open, and if bad weather blows in, it could be closed mid-game.

Belskus doesn’t expect ticket prices to change much from the team’s games at IUPUI.

The Eleven, Belskus said, are working on a deal with the Indianapolis Colts to utilize the suites. Colts suite holders often retain the rights to use their suites during non-Colts events.

City officials said they’d like to see the Eleven play at Lucas Oil Stadium for multiple years, but Eleven officials made it clear that they are still seeking to build a soccer-specific stadium.

“Our long-term goal of having a soccer-specific stadium has not changed,” Belskus said. “How long this deal lasts remains to be seen.”

The deal to play in Lucas Oil Stadium is an outgrowth of officials from the city and Eleven working together, Belskus said, noting that there was only so much the city could do for the team while it played in the state-owned stadium at IUPUI.

“We’re very grateful to the city and the Colts and all the other parties who made this possible,” Belskus said. “What this really is about is offering a far superior fan experience.”