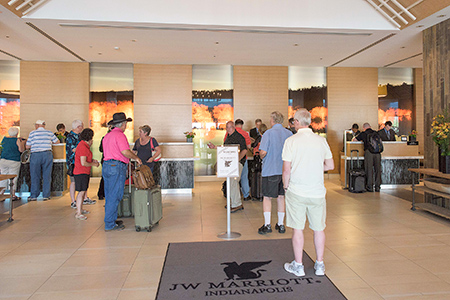 It’s understandable if the city of Indianapolis’ welcome mat is getting some wear marks.

On Thursday afternoon, Visit Indy reported that a record number of tourists visited the city and spent a record amount of money in 2016—the most recent year for which data has been compiled.

Visitors to the city in 2016 generated $719 million in state and local taxes, according to the report.

“Indy is on an unprecedented run of convention, sports and tourism success, going back to the Indiana Convention Center expansion in 2011 and the Super Bowl in 2012,” Hoops said in written remarks. “We’ve become a 12-months-a-year travel destination, topping $5 billion in visitor economic impact for the first time. And we’re confident through our ongoing regional tourism master plan efforts, and our track record of steadfast support from elected and civic leaders over the past four decades, that our best is yet to come.”

It takes almost a year to aggregate and tabulate local tourism data, Visit Indy officials said, but it looks like 2017 and 2018 numbers will be at least as strong as 2016's.

“The sheer volume of visitors to Indy on an annual basis continues to soar,” Visit Indy Vice President Chris Gahl told IBJ. “Based on future hotel occupancy, the number of conventions and events on the books, and our overall dashboard for future visitation, we anticipate records to again be set in the years ahead.”

Visit Indy booked 874,473 future group room-nights (which includes conventions, trade shows, meetings and events) in 2017 for events scheduled to occur as far out as 2028, worth about $1 billion in future visitor spending.

The city's tourism and hospitality business has been so robust, city officials are considering a new, large downtown hotel project.

Among the major events that contributed to the 2017 increases:

— Visit Indy worked with the Capital Improvement Board and city officials to win bids to host future conferences and conventions for the American Society for Microbiology (2018), American Wind Energy Association (2021), Fraternal Order of Police Grand Lodge (2021), and Association for Professionals in Infection Control and Epidemiology (2022)

— Gen Con agreed to keep its huge annual convention in Indy through 2022.