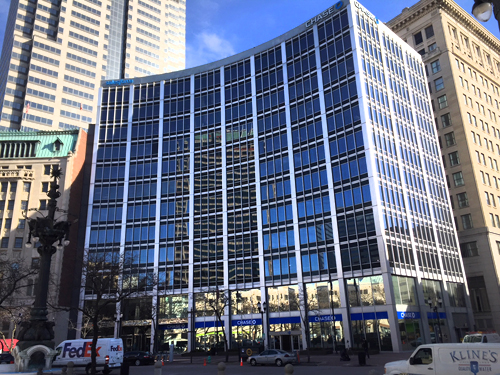 An affiliate of a large north-side accounting firm is moving roughly 50 of its employees downtown into a prized Monument Circle address to give the company a more centralized presence.

KSM Consulting, part of Katz Sapper & Miller, is set to complete construction in April on what it calls an "office and innovation center" on the second floor of the 12-story, steel-and-glass Circle Building at 111 Monument Circle. Located in the northeast quadrant of the Circle, the building is connected to Salesforce Tower on the opposite side of the block and considered part of the Salesforce Tower complex.

Dubbed KSMC111, in reference to the address, the space will contain the firm’s data analytics and project management practices and will house about half of the company’s 100 employees.

“We had started to outgrow our space on the north side, so we needed to find another location,” said Charlie Brandt, CEO of KSM Consulting. “We have clients downtown, employees who live downtown and some on the south side.”

The company is taking almost 10,000 square feet on the second floor of the Circle Building, near the office of Hertz Investment Group, which owns the building and connected Salesforce Tower. Santa Monica, California-based Hertz purchased them for $162 million in 2016.

Actuarial firm Milliman last occupied the space, along with the entire sixth floor of Salesforce Tower, but left for Market Tower when Hertz couldn’t offer it enough contiguous space in the building.

The space for KSM Consulting has been vacant only about three months, said Rick Trimpe, vice president of leasing for Hertz’s Midwest region.

“We just think that the KSM occupancy validates and builds on the [downtown] tech experience, and it’s one of the top companies in the market,” Trimpe said.

Salesforce Tower, formerly Chase Tower, took on the new name in May, when San Francisco-based tech giant Salesforce.com Inc. established its regional headquarters in the building and began occupying 11 floors in the 48-story tower.

The tower complex currently is 76 percent occupied, Trimpe said, but the number is expected to increase to 86 percent once Salesforce is finished ramping up operations there and KSM Consulting arrives.

Overall, the downtown office market finished 2017 on a strong note, posting 72,000 square feet of net absorption during the fourth quarter, and bringing the total for the year to 112,000 square feet, according to JLL’s fourth-quarter office report.

The entire Indianapolis-area office market, however, isn’t performing as strongly. Vacancy at the end of 2017 stood at 17.8 percent, up from 16.4 percent the previous year.

Total vacancy in the North Meridian submarket was 13.5 percent, up from 9.9 percent at the end of 2016. Vacancy in the Keystone at the Crossing submarket rose from 13.9 percent to 19.3 percent.