In 1936, English economist John Maynard Keynes wrote, “Worldly wisdom teaches that it is better for reputation to fail conventionally than to succeed unconventionally.”

Keynes was obviously not referring to football, but he could have been talking about the reluctance of coaches to “go for it” on fourth down and how Philadelphia’s Doug Pederson turned this conventional wisdom on its head with two critical fourth-down plays that led to the Eagles’ 41-33 upset win over the New England Patriots in Super Bowl LII. 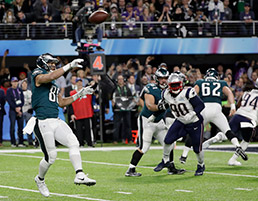 A recent article in The New York Times said the Eagles are a client of EdjSports, a player in the burgeoning field of sports analytics, which describes itself as “scientists committed to helping our clients win more—no matter the game, race or match.”

According to the article, the Eagles apply analytics to “everything from roster management to in-game strategy.”

With the goal of using analytics to increase the probability of winning (Game Winning Chance, or GWC, in Edj-speak), EdjSports President Tony DeFeo said, “the Eagles capture value at every turn because they understand where the value lies.”

No situation illustrates both the benefit of analytics and curse of conventional wisdom than whether to “go for it” on fourth down.

This past regular season, the Eagles went for it 26 times (second-most to the Packers’ 28) and converted 17, not because Pederson is a wild-eyed gunslinger, but because he’s a cold, calculating statistician focused on process, not outcome.

Leading 15-12 with 38 seconds remaining in the first half, the Eagles faced fourth down at the Patriots’ one-yard line. Conventional wisdom is you “have to” come away with points, so kick the field goal. However, with New England getting the ball to start the second half (the Patriots would score a touchdown in less than three minutes), Pederson knew accepting the short-term risk of failure on fourth down increased his long-term chance to win the game.

The Eagles completely flummoxed the Patriots (and delighted millions) by running “Philly Special,” a trick play that resulted in QB Nick Foles’ catching a pass for the touchdown.

While Philly Special got the glory, Pederson’s decision to go for it on fourth-and-one from his own 45-yard line, down 33-32 with 5:39 to play, was the decider. Eschewing the standard quarterback sneak, the Eagles completed a two-yard pass that led to the game-winning touchdown seven plays later.

Richard Thaler of the University of Chicago won the Nobel Prize last year for his pioneering work in the field of behavioral economics. According to classic economic theory, individuals are like Mr. Spock, perfectly rational and capable of unemotionally analyzing and acting on all relevant data. In reality, Thaler asserts, humans are more like Homer Simpson, highly emotional, lacking in self-control and influenced by all sorts of biases that often lead to poor decisions.

Coaches’ reluctance to go for it on fourth down (particularly early in a game), even when it would improve their chances to win, shows most of them are also more like Homer Simpson than Mr. Spock. If you want to be above average, you can’t just follow what everyone else is doing. Today’s conventional investing “wisdom” is, it’s impossible to outperform “the market,” so dollars have been flooding into passively managed index funds. That’s a recipe for mediocrity.•

Kim is Kirr Marbach & Co.’s chief operating officer and chief compliance officer. He can be reached at (812) 376-9444 or mickey@kirrmar.com.