Home » Banks have returned to commercial real estate in a big way, but regulators urge caution 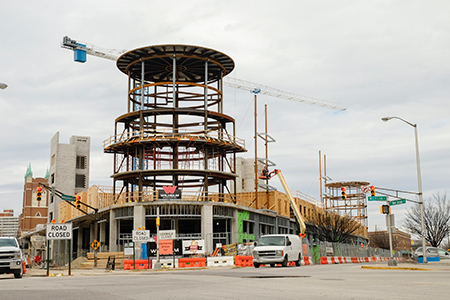 Following a steep drop-off in the Great Recession, banks in Indiana and across the nation are again beefing up their commercial real estate lending—and industry watchdogs are taking note of what they perceive as heightened risk.

Commercial real estate loans—used to build apartment complexes, strip shopping centers and the like, as well as finance the purchase of existing commercial developments—are notorious for their boom-and-bust cycles.

The segment crashed in the financial crisis that began in 2008, forcing banks to write off billions of dollars in loans. But it’s roared back since, and last year national commercial real estate lending surpassed its 2008 peak. 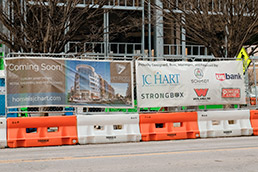 Minneapolis-based U.S. Bank is providing financing for Penrose on Mass, which is being built on the former site of the Indianapolis Fire Department headquarters. (IBJ photo/Eric Learned)

A combination of low interest rates and strong commercial real estate values is responsible, along with “the credit quality problems of 2008-2010 [receding] from institutional memory,” Standard & Poor’s wrote last May in a cautionary report titled “U.S. Banks Are Increasing Their Commercial Real Estate Lending—But At What Risk?”

Hoosier banks, for their part, say they’re riding the wave but without taking undue risk.

Even so, O’Driscoll said Old National treads carefully. For example, it has become “more sensitive” about lending for big-box retail and apartment construction over the past year, as those markets have softened.

Michael Stewart, chief banking officer for Muncie-based First Merchants Corp., said his institution uses a range of methods to reduce risk—including stipulating that developers personally guarantee loans and requiring that they justify the soundness of their project with market research.

As of the end of 2017, commercial real estate lending represented 34 percent of First Merchants’ portfolio. Stewart said the bank spreads those loans across its four-state footprint, ensuring it isn’t too exposed to the ups and downs of a particular geographic area.

Officials at Warsaw-based Lakeland Financial Corp. believe they mitigate risk by shying away from speculative developments—projects built without firm tenants in hand.

They also view lending to buy an existing facility like a medical or commercial office building as less risky than lending for construction. The former represents 13 percent of Lakeland’s portfolio; the latter, 6 percent.

“We believe developers are very much more conservative than they were in the last business cycle,” said David Findlay, CEO of Lakeland, the holding company for Lake City Bank. “We’re not seeing nearly the level of speculative real estate.”

Indeed, the big ramp-up in lending is not inherently problematic, some banking observers said.

Growth in commercial real estate lending “doesn’t in and of itself mean there’s greater risk,” said Indianapolis banking attorney John Tanselle, a partner at SmithAdmundsen LLC. “It depends on how the banks are underwriting these loans.”

As of year-end 2016, U.S. banks had a combined $1.63 trillion in commercial real estate loans on their balance sheets, surpassing their previous peak of $1.52 trillion from 2008, according to the May 2017 Standard & Poor’s report. CRE lending growth is also outpacing overall loan growth, the report said.

But it noted that commercial real estate loans can sour in a recession—causing the economics on which they were based to suddenly unravel.

A developer who borrows to build an apartment complex, for instance, faces the risk that demand will weaken between the time construction begins and tenants start to move in, raising the specter that vacancies will be too high and rents too low to satisfy mortgage payments.

“You’re going to have to get a certain number of tenants in a building at a certain dollar level,” said Scott Siefers, a research analyst who works in the New York City office of the financial firm Sandler O’Neill + Partners.

In the worst-case scenario, a bank might repossess the property but not be able to recoup the amount of its loan.

Regulators have reason to be cautious. During the Great Recession, banks with large exposure to commercial real estate lending tended to get hit harder. Some even failed.

The Office of the Comptroller of the Currency, which regulates all national U.S. banks, included a note of caution in its semiannual risk report released in January.

“Increasing concentrations of commercial real estate loans highlight the need for sound risk management processes and the effectiveness in managing concentration risk for some banks,” the OCC said. 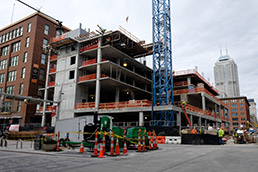 One of First Internet’s specialties is “single-tenant lease financing”—loans to finance a retail space that will house a single restaurant or store, such as Walgreens, Red Lobster or CVS.

As of the fourth quarter of 2017, First Internet had $803 million in single-tenant lease financing loans on its books. That’s up from $607 million a year earlier.

First Internet got into this type of lending during the Great Recession. As other banks flailed, First Internet saw an opportunity.

“Since 2008, we’ve put out over $1.5 billion of [single-tenant lease financing] loans,” Becker said. “We’ve found a nice niche and we’re sticking to our knitting.” 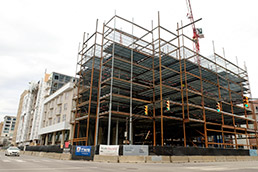 Many banks, he said, steer away from single-tenant lease financing because they deem it too risky. The risks are real, he said, but First Internet knows how to mitigate them.

For one thing, the bank typically won’t lend more than 52 percent of the project’s value. So if a borrower plans to build a $1 million drugstore, First Internet would lend no more than about a half-million dollars.

This way, Becker said, the bank is protected even if real estate prices fall.

First Internet also wants lease terms to be at least as long as the term of the loan, reducing the risk of a vacancy before the loan is paid off.

While not all banks take such precautions, Becker doesn’t fear another Great Recession, in part because banking regulators have become effective at reining in banks’ risky behavior.

“The regulatory group is a little wiser and smarter than they were last time, and they’re checking the documents a little deeper,” he said.

But these are only guidelines, and banks can attempt to persuade regulators to relax these limits in certain cases.

He specializes in banks based in the Midwest and covers about two dozen institutions, including First Merchants Corp., Greensburg-based MainSource Financial Group Inc. and Old National Bancorp. He said all the banks he covers have commercial real estate lending concentrations well below regulatory recommendations.

“It’s just a nonconcern for my coverage list,” Siefers said.•