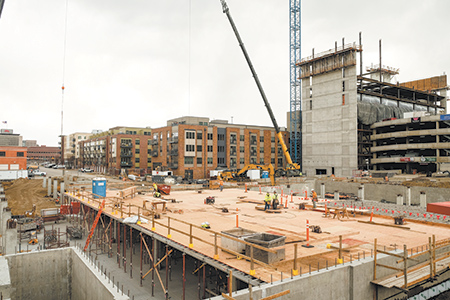 The Hogsett administration and the City-County Council are weighing whether to kill a little-known organization that has quietly worked the past two decades on the redevelopment of key downtown projects.

But the group has largely escaped public scrutiny (it wasn’t subject to audits for years, for example) despite its role in shaping downtown development since it was created in 1997 during then-Mayor Steve Goldsmith’s administration.

Now, critics are calling for the city to shut down the community development corporation, saying that, over the years, it has acted mysteriously and been a tool for the Mayor’s Office to escape oversight from the council, the city’s fiscal body. At issue in part is that the group can issue debt the city—rather than CACDC—might ultimately be required to repay.

As a result, City-County Councilor Joe Simpson recently called some of the group’s activities “illegal.”

“I’m outraged about this,” Simpson said. “I’ve sat on the council for six years, and not once has anyone come to us aware of this [group]. We talk about crime in this city, and we’ve got people with taxpayer dollars spending millions and nobody’s saying anything about it.”

CACDC was originally set up to control the direction of downtown development after Circle Centre mall was built. Indy Chamber President Michael Huber said, “In certain situations, there can be an important role for the city to get involved in assembling property among disparate owners for the purposes of creating something better.”

“There’s a strong argument to be made that, in some situations, you need to have a tool for assembling property for higher and better uses,” Huber said.

Sarah Riordan, whom Hogsett had just hired to serve as director of the Indianapolis Bond Bank, said she received a phone call about two loans inked between BMO Harris and the CACDC in the last days of former Mayor Greg Ballard’s administration. Interest payments were coming due, Riordan said.

One of the loans was for $9.1 million to help finance the proposed 21c hotel redevelopment project at Old City Hall, money that was to be repaid with the new tax revenue generated by the hotel. Another loan was for $18 million to help finance an additional 400 apartments and more retail space at the CityWay development, debt that would be paid using downtown tax-increment-financing dollars generated by CityWay.

The loans were unusual because they weren’t technically on the city’s books and weren’t controlled by the Bond Bank. Still the city’s Department of Metropolitan Development could be on the hook for the payments if the taxes generated by the projects weren’t enough or if, in the case of CityWay, the developer doesn’t meet its obligations, Riordan said. So far on that project, the city “hasn’t paid a dime” because everything is working as planned, she said.

But the 21c loan became an immediate problem for the Hogsett administration, in part because—at that time—the project remained up in the air. Eventually, the administration scrapped the project when Louisville-based 21c Museum Hotels LLC failed to secure financing.

“The actual DMD was on the hook if the project didn’t take place,” said Hogsett’s chief of staff, Thomas Cook.

But Riordan’s negotiating skills helped close out the 21c loan with BMO Harris when the project fell through, he said.

“We had to pay a little bit in interest and a little bit for BMO’s trouble, but they gave us a good deal,” Riordan said.

And that wasn’t the only CACDC action that raised eyebrows.

In December, the council had to vote to give the city authority to refinance debt on a city-owned parking garage managed by CACDC in order to avoid a $16 million balloon payment on a loan coming due in January.

The group had assumed owner obligations and rights, but not actual ownership, of the garage in 2011, including fulfilling city debt and maintenance obligations.

“We don’t find ourselves blessed with $16 million in cash laying around,” Cook told the council at the time.

Cook told IBJ there was “no clear direction” from the Ballard administration about what that staff intended to do with the loan. But he said his impression was Ballard officials “intended to have whomever was in that position [in the future] solve the problem.”

Councilor Zach Adamson voted in that December meeting to allow the city to refinance the debt but said he was doing so “under protest” because he believed the deal was “entered into illegally.”

Adamson said he was tired of “doing a lot of damage control” as the result of past CACDC deals.

“We spent a lot of time finding ways to pay the debt that is raised by an entity that wasn’t under the oversight of the city’s fiscal body,” he said.

“That is just beyond unthinkable. How can an entity that isn’t responsible enter into debt but not be responsible for its repayment but obligate the city and this body?” Adamson said. “I don’t understand how that works.”

Since taking office, Hogsett has taken “a very conservative legal approach” to CACDC’s authority, Cook said. The mayor replaced all the group’s board members in 2016. Since then, Riordan said, the group has been managing its current deals but not seeking new ones.

Hogsett has also sought to get CACDC on the books. The group had never been audited and was not on file with the State Board of Accounts until Hogsett’s administration took both of those steps, according to Riordan.

Not-for-profits are required to register with the State Board of Accounts if they receive any public funding, said the agency’s communications officer, Skii Ficklin. But he said “it is not uncommon that entities are not aware of their filing requirements with us.”

Not everyone thinks the development group should be eliminated. Instead, proponents are calling for changes to make the group’s actions more transparent.

Huber, who served as deputy mayor for economic development under Ballard from 2008 to 2012, said the entity has been used effectively for key developments downtown and that it could be useful in the future.

“The question people need to ask is, ‘If not this tool, how would the city do strategic property acquisition for economic development or dense development?’” Huber said. “Don’t get rid of the tool. Just make sure there’s adequate transparency and disclosure associated with it so there’s plenty of opportunity for the public to know how it’s being used.”

The year it was founded, CACDC financed construction of the Circle Block parking garage on Illinois Street in conjunction with the development of Emmis Communications Corp.’s Monument Circle headquarters. The group was able to build the garage with a mortgage backed by future parking revenue because it’s a private entity, something the city can’t do.

Emmis has been leasing parking spaces from the garage since its inception, which generates about $430,000 annually for CACDC.

The group also participated in the redevelopment of the Market Square Arena site, which is now home to the Cummins distribution headquarters and the 360 Market Square tower. In 2011, it bought a key parcel in the area—a parking lot at 302 E. Washington St. Former CACDC Chairman Deron Kintner told IBJ at the time that having the group purchase the lot instead of the city made it better able to accommodate development. The city later took possession of the lot and sold the entire site to Cummins.

But the deals that seem to rankle critics are the Ballard administration’s last-minute loans for the 21c hotel and for CityWay because they obligated future tax revenue to repay them—but without going through the City-County Council approval process.

“I’m a huge supporter of CityWay I and II,” said Councilor Jeff Miller, a Republican, who has remained on the council despite awaiting trial for child molestation charges. “If this had come before the council, I would have defended any deal they had. The issue isn’t the loan; it’s that it didn’t come before us.”

The CityWay deal is similar to a developer-backed bond, Riordan said.

“Normally, those would have to go through the City-County Council,” she said. “In this instance, it didn’t.”

Critics say conflict between Ballard and the council as the Republican’s term wound to a close could be one reason the administration used CACDC for projects. Cook said, in fact, that some councilors believed it was an entity “utilized to circumvent traditional legislative and fiscal authority.”

Still, Hogsett hasn’t decided whether to shut the group down and doesn’t yet have a “fully formed thought” about what the future holds, Cook said.

“Is it something that’s going to be playing a role in the future?” he said. “If so, how can we ensure that’s a role that’s public, transparent and is viewed as a valid tool in the toolbox between the council and the Mayor’s Office, not a tool used by the Mayor’s Office against the council, which I think was the perception of some councilors in both parties when we took office.”

Also, Riordan said, shutting down CACDC might not be easy because decisions will have to be made about how its assets are handled.

And Huber said that, in the future, the group could be used “to acquire property for a transit-oriented development.”

“As a taxpayer, I’d like to see dense ambitious development along transit corridors,” he said. “You’re looking for the city to get out in front of an opportunity and acquire land to do something big and bold.”

But Miller said if CACDC is not shut down, “you’ve got to restructure the heck out of it.”

“If you want to keep this thing open, they should be coming to us, having us put in board appointments or put in bylaws,” he said. “This is a mess.”•