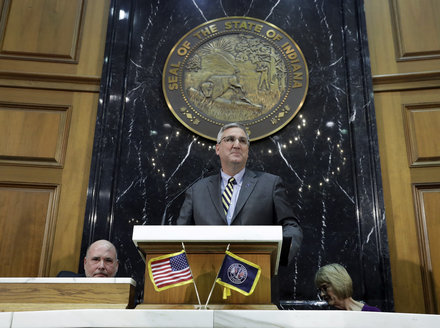 Indiana Gov. Eric Holcomb on Monday morning ordered lawmakers to return to the Statehouse sometime in May for a special session of the Indiana General Assembly after Republican supermajorities failed to come to consensus on key bills by the time this year's session ended last week.

The Indiana General Assembly devolved into chaos on its final night last week, as Wednesday's midnight deadline spilled over into Thursday.

"As we walked away and caught our breath and let the dust settle early morning Thursday, we started to immediately assess what needed to be tended to right now," Holcomb told reporters Monday morning. "We need to finish the people's business before the next budget session is upon us.”

Statehouse leaders said they had trouble getting consensus on a few key issues—which left Holcomb's legislative agenda caught in the middle.

Remaining unresolved were the fates of bills that would have increased Indiana school safety funding in the wake of the deadly Parkland shooting in Florida, put regulations on autonomous vehicles while trying to encourage innovation in the state, and addressed the struggling Gary and Muncie school systems.

But Holcomb did not call for all of those to be addressed during the special session. He said the special session should only address time-sensitive issues, and he said he was setting an example for lawmakers by not asking them to address the autonomous vehicles bill.

He called for them to “stay focused on what is urgent” and said the autonomous vehicles bill did not rise to that level.

Instead, Holcomb called specifically to increase funding for the Indiana Secured School Fund by $5 million now and in the 2019 fiscal year. He also wants lawmakers to allow school corporations to obtain funding advances for school safety equipment and capital purchases.

The Gary-Muncie bill, which was loathed by Democrats and public education advocates, would have further diminished the authority of Gary’s school board and allowed Ball State University to take over Muncie schools.

Holcomb said he would prefer to wait to address that issue, instead calling for the Legislature only to provide Muncie Community School Corp. with one-time $12 million loan from Common School Fund.

Holcomb said he would also seek legislation to “conform with federal tax reform changes by update the state’s conformity date to Feb. 11.” He also asked lawmakers to act to "comply with IRS rules to protect federal taxpayer information.”

Top lawmakers said they approved of Holcomb’s call for a special session.

"This special session will be limited to those important issues which remained on the table at the close of the regular session,” Bosma said. "We will continue to work closely with the governor and our Senate colleagues, and we are committed to keeping this session extremely focused and efficient in terms of scope and time.”

Senate President Pro Tempore David Long said the Senate will “support [Holcomb’s] decision and work diligently to complete the tasks he sets out for us.”

“We will be efficient and focused, and are committed to collaborating with our colleagues in the House and with the governor to act in the best interest of Hoosiers,” Long said in a released statement.

Indiana Chamber of Commerce President Kevin Brinegar said it was important that the Legislature pass a bill that addressed tax reform because inaction would mean companies would have to calculate their federal adjusted gross income twice.

“This bad situation had to be fixed and the Chamber applauds Governor Holcomb for making the tough, but correct decision, to call a special session,” Brinegar said.

“Since legislators will be back for the day, we encourage them to also take up other key measures – on school safety and various tax matters – that would have passed had the clock not run out,” Brinegar said in a released statement. "They should use this opportunity to pass these bills that were ready to be voted on in the waning hours of the legislative session.

”But Indiana Democrats, who hold just over a quarter of the seats in the General Assembly, slammed Republicans for the need to call a special session.
Democratic party chairman John Zody said Republicans look “out of touch.”

“Governor Eric Holcomb’s special session is the $30,000/day cherry on top of Republicans’ ineptly-managed, visionless legislative session,” Zody said in a released statement. "Republican leadership incompetently steered session into a wall on the last lap. Now they’re asking taxpayers to foot the bill for another shot at passing their do-nothing agenda."