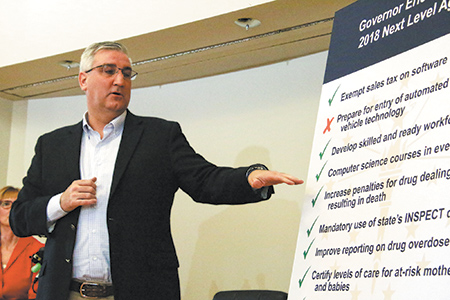 Indiana businesses and individual taxpayers might have double the work (and double the cost) to calculate their taxes next year, since lawmakers packed up and went home this month without passing a key update to state tax laws.

The mistake, if not corrected during an upcoming special session, could cost the Indiana business community upwards of $100 million in additional tax preparation costs, the state’s top business advocacy group estimates.

In a typical year, that requires just a few tweaks (often just a date change) that help make it easier for taxpayers to prepare their state returns after filing their federal ones.

But because Congress made huge modifications to federal tax law, the state update wasn’t so straightforward. And lawmakers were still working on those changes when midnight came and went on the legal deadline for the session to end.

IBJ.COM EXTRA
See a roundup of what the Legislature has accomplished this year.

The tax update is one of five issues Gov. Eric Holcomb wants the House and Senate to tackle in a special session he’s called for May. The governor said the tax bill is “as important as school safety in my mind,” referring to another of his special-session priorities.

“This was absolutely not the year to fail to pass a revenue update bill,” said Brinegar. “Really, all of us ultimately would have had to calculate things two different ways.”

That’s because, each year, taxpayers first fill out their federal tax returns and arrive at their federal gross adjusted income. For an individual, that means the amount subject to income tax—which includes wages from a job, investment earnings and interest from a bank account—minus eligible deductions.

That figure is used as a starting point in calculating state tax liability so taxpayers aren’t forced to calculate their income separately for federal and state returns.

But major changes in how the federal adjusted gross income is determined can wreak havoc on state tax revenue. Taxpayers could end up paying significantly more or less, depending on the changes.

Since this year’s federal changes were so significant, state budget officials wanted to study what the impact would be on Indiana revenue—and they didn’t get that report until late in the legislative session.

The report by Ernst & Young estimated that if Indiana simply conformed with the federal tax law without any changes, state corporate income tax revenue could be boosted by 12 percent. But both state officials and business leaders wanted to keep the final changes as close to revenue neutral as possible, although they acknowledged they are using estimates.

Lawmakers and the Holcomb administration went “back and forth” on possible changes, Brinegar said.

Brinegar said it took time to hash out those types of agreements and “that’s why this bill got caught up in the train wreck that happened on the last night.”

That train wreck occurred when the House and Senate ran out of time to pass all the bills on their calendars before midnight on March 14, which state law sets as the deadline for legislation during even-numbered years.

The Indiana Chamber estimates the mistake could cost business taxpayers $100 million, which Brinegar said is a “back of the envelope number,” estimating that each of the state’s approximately 50,000 businesses would have to add roughly $2,000 in costs to do their taxes twice—once under the new federal formula and once for the state using the previous federal formula.

Lawmakers have passed around blame for what derailed the end of the session, including disagreements over bills that didn’t get resolved until late and spending too much time on ceremonial resolutions.

Brown said it was about 11 p.m. on March 14 when “it started to hit me” that the tax bill, and a slew of others, might not be called for votes in time. Holcomb tried to extend the deadline with an executive order so the tax bill and others could pass, but legislative leaders decided it wasn’t legal.

If lawmakers fail to fix the problem, small businesses—and individuals who do their own taxes—could be most affected. Barbara Quandt Underwood, the director for Indiana’s chapter of the National Federation of Independent Business, said “anything that adds complexity or uncertainty is bad news for small businesses.”

Being forced to keep two sets of books and calculate federal gross adjusted income based on two standards “could be definitely a problem for small business,” Underwood said.

“The big guys have whole teams to work with this, but the small-business owner usually just has himself or a tax preparer around tax time,” she said. “That makes it challenging.”

Vincent said individual taxpayers could be affected, too. It’s unclear whether tax preparation software like Turbo Tax would be equipped to handle that Indiana-specific quirk, he said.

“When you start thinking about the cost that would go into this, you’re talking about costs for both families and employers that don’t go into more productive areas,” Vincent said. “Instead of being able to invest in things that lead to more opportunities, you’re spending money on compliance.”

However, because of the special session planned for May, Brown said businesses should proceed with their taxes as they normally would.

“I believe very strongly it will get done,” he said. “I think what [the special session] will do is signal to the business community and taxpayers that, yes, we want filling out tax forms to be simple and we want predictability.”•