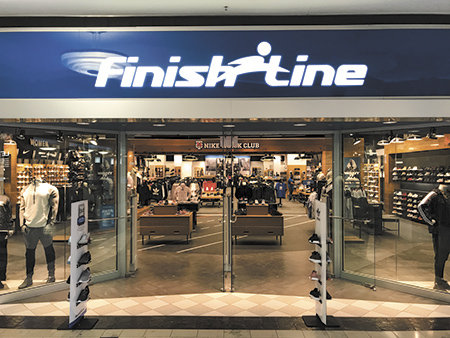 The Finish Line Inc. announced Monday morning that it has agreed to be acquired by a European sports retailer for $558 million, a deal that would end the Indianapolis-based company's 42-year run as an independent company.

Rumors have swirled for months that United Kingdom-based Sports Direct International, which began buying up Finish Line shares last year, would purchase Finish Line. But the buyer turned out to be its top rival, JD Sports Fashion, which recently overtook Sports Direct to become the United Kingdom's biggest sportswear retailer.

JD plans to retain Finish Line management and use the Indianapolis company as its platform for North American expansion.

"With JD, Finish Line achieves immediate value for its shareholders and moves into a stronger position to compete as part of a global enterprise that leads in our industry," Bill Carmichael, the lead director of Finish Line, said in a written statement.

Peter Cowgill, JD's executive chairman, added: “The acquisition represents an excellent opportunity for JD to establish its market-leading multi-brand proposition in the world’s largest athleisure market. It immediately offers a major presence in the U.S., a clear next step to further increase our global scale."

Finish Line stockholders will receive $13.50 in cash for each of their shares, a 28 percent premium to Finish Line's closing price on Friday. But the price is far below the company's all-time high of about $30 a share achieved four years ago.

Recent years have been bumpy for Finish Line, in part because its top vendor, Nike Inc. has hit a cold streak in terms of game-changing product launches. That's forced Finish Line and rivals to cut prices on shoes, apparel and other merchandise they had hoped to sell for top dollar.

Finish Line was one of Indiana's top entrepreneurial success stores for decades. The company began in 1976 when three friends who also were running enthusiasts—Alan Cohen, David Klapper and John Domont—opened a franchise of The Athlete's Foot on Monument Circle.

The company broke off from Athlete's Foot and began operating as The Finish Line in the early 1980s. It went public in 1992.

Several law firms in Indianapolis had a hand in the JD Sports deal. Barnes & Thornburg LLP represented Finish Line, and Faegre Baker Daniels LLP served as legal counsel to a Finish Line board committee formed to evaluate the transaction. In addition, Taft Stettinius & Hollister LLP is one of two firms serving as U.S. counsel for JD.

The deal is subject to Finish Line and JD shareholder approval The companies said closing would be in June at the earliest.