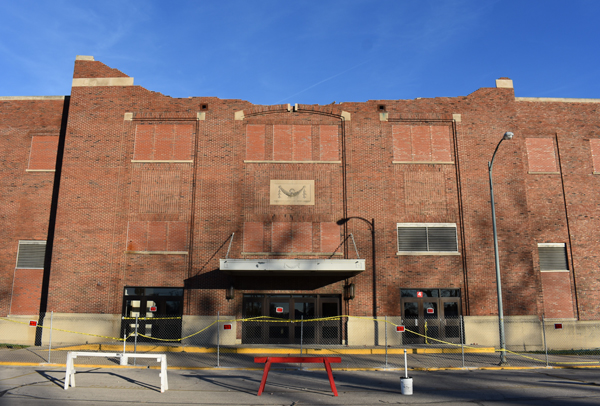 One of the largest high school gyms in the nation, a college campus and an internationally known church designed by a famous architect are among the properties on this year’s “10 Most Endangered” list from Indiana Landmarks.

Indiana landmarks has been issuing a “Most Endangered” list since 1991. Demolition has claimed only 16 of the 131 sites listed since 1991, while 84 places have been completely restored or are no longer endangered.

“We put places on the endangered list to raise awareness and find ways to save them,” said Indiana Landmarks President Marsh Davis in written remarks. “Indiana Landmarks has been able to solve problems, forge partnerships, and create revitalization strategies that wrest these sites from the brink of extinction,” he adds.

The only repeat property from last year’s list is the Marion National Bank Building. Constructed in 1917, the seven-story building dominates downtown Marion’s National Register-listed historic district. It has been vacant for more than a decade. A Los Angeles investor owns the landmark and hasn’t invested in repairs.

— Muncie Fieldhouse, Muncie: The 1928 arena is the fifth-largest (or sixth if you include Anderson’s closed Wigwam) in the nation with a seating capacity of 7,635. The venue has hosted an array of community events—a 1939 speech by Eleanor Roosevelt, a 1942 Abbott and Costello war bond rally, annual Christmas Sings and Independence Day celebrations. The struggling school system in Muncie says it can’t afford to repair damage from a November storm.

— North Christian Church, Columbus: One of seven National Historic Landmarks in Columbus, the church has a dwindling congregation that can’t support the repair and maintenance of the facility. Modernist architect Eero Saarinen designed the church, which is known for its hexagonal sanctuary and 192-foot spire, before he died in 1961. It opened in 1964. Well-known landscape architect Dan Kiley designed the 13.5 acre grounds.

— Cannelton Historic District, Cannelton: Sandwiched between the Ohio River and high sandstone bluffs, Cannelton’s historic district encompasses much of the town, including houses, downtown commercial buildings, churches, and the Cannelton Cotton Mill, a National Historic Landmark. Half of the district’s 169 structures, which date from 1837 to 1936, face jeopardy, and more than two dozen are vacant.

— Commandant’s Row at Indiana Veterans’ Home, West Lafayette: In the 1890s, Indiana created a state soldiers’ home for Civil War veterans on land donated by Tippecanoe County. The Commandant’s Home (1899), the Lawrie Library (1896) and the Administration Building (1896) are original buildings at the site but face demolition by neglect.

— The Courtyard Inn, Rising Sun: The five buildings—four connected—that form the shuttered Courtyard Inn represent the earliest links to the Ohio River flatboat industry that put Rising Sun on the map. The structures include a former general store that dates to 1827 and row houses dating to the 1830s.

— Cravenhurst Barn, Madison: Owned by the Loyal Order of Moose, the barn is part of a property that includes a home built by former Ohio Gov. John Brough. The house is operated as a museum by the state, but the 1906 barn has declined to a perilous state.

— Old Masonic Hall, Knightstown: Located on the historic National Road on a prominent corner, the hall sits empty and decaying in a National Register-listed district. The 118-year-old structure’s corner oriel and conical tower show its distinctive original character despite changes to the ground floor.

— Rocky Edge, Terre Haute: The 88-acre estate in Allendale, a hilly neighborhood south of Terre Haute, was owned by Chapman Root and his family from 1925 to the 1960s. Root owned the Terre Haute glass company that designed the curvy Coca-Cola bottle recognized throughout the world. The long-vacant estate has a Spanish Revival-style hillside villa, rock gardens, glass-enclosed pool house, conservatory, private zoo and strange subterranean spaces where bootleg liquor might have been stored. Indiana Landmarks says the property needs a new owner who’ll restore the estate.