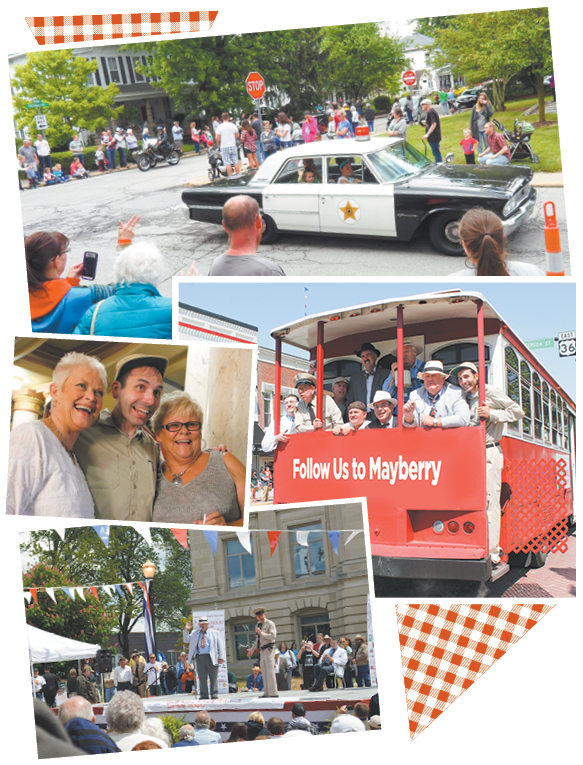 A parade and appearances by impersonators and actors who appeared in the show are part of the Mayberry in the Midwest festival. (Photos courtesy of Visit Hendricks County)

The fictional North Carolina town of Mayberry exists somewhere near the intersection of Nostalgia Boulevard and Fantasy Lane.

It’s a place where your aunt’s award-winning pies are always served hot from the oven, where a dad and son can whistle their way to a fishing hole, and where a bumbling sheriff’s deputy can keep his job.

And it’s a place still beloved by fans, even though the series that made the town famous, “The Andy Griffith Show”—later renamed “Mayberry RFD”—ended its original run in 1971.

That love has fueled the growth of Mayberry in the Midwest, which returns for a fifth year May 18-20 in downtown Danville. The town’s only link to the show is its signature eatery, the Mayberry Café, but that doesn’t keep it from celebrating the small-town pleasures of the hit series and its spin-offs.

Even with a rainy Saturday last year, the festival attracted about 6,000 attendees. The event has the usual festival fare, but there’s a lot more going on over three days, including a Mayberry trivia competition, a pancake breakfast, and a small but enthusiastic parade, all pulled together on a $40,000 annual budget.

“We’ve tried to add more free activities,” said event organizer Christa Miller of the Downtown Danville Partnership. “As a mom, I don’t like events where they nickel and dime you.” At Mayberry in the Midwest, that translates to a steady stream of bluegrass music on the main stage, plus performances by a tribe of character impersonators. “It’s fun to see grandparents bring their grandkids and get excited about the same thing. You’d think it was really Barney Fife.”

Not all of the guests are once-removed mimics. This year’s lineup includes Maggie Peterson Mancuso, the real-life actress who played Charlene Darling, only daughter of a nearby hillbilly family, in five episodes of the original series. Margaret Kerry, who appeared in a pair of episodes (and was the model for Disney’s Tinkerbell), will also be on hand, along with children of both Andy Griffith and George “Goober” Lindsey.

Most recognizable should be Ronnie Schell, who, in addition to a few appearances on the series, was a regular throughout most of the 1960s on the spin-off series “Gomer Pyle, USMC.” Anyone who came of age in the 1970s is likely to recognize him for his many appearances on such shows as “Happy Days,” “Adam-12,” “Charlie’s Angels” and “Mork & Mindy.”

Schell, whose show at the festival carries a modest $10 ticket price, attributes the continued popularity of the TV shows—and the festivals—to its “homespun humor.”

“There’s nothing dirty,” he told IBJ. “The laugh tracks are at a minimum—the producers didn’t like huge ones—and people always wanted to live in a little town like Mayberry.”

Schell was first recruited into the festival fold to join the flagship Mayberry Days event in Mount Airy, North Carolina, and will be returning to the Danville gathering for his second year. “The cast of both ‘Gomer Pyle, USMC’ and ‘The Andy Griffith Show’ is diminishing with the passing of several key characters,” he said, including Schell’s friend Jim Nabors. “I’m the only living member now from the cast.”

His performance will include a tribute to Nabors, who never made it to the festival, which launched just as the iconic Indy 500 crooner started getting ill.

While the adult leading players in the beloved shows have passed, Christa Miller is still hoping that a future festival will include a visit from one of the show’s iconic stars, who is now a director.

“I have reached out to Ron Howard, but without success,” she said. Still, the festival includes an Opie’s World play area.

Miller also believes the festival could have an even longer life than the original series itself.

“Someone told me that it has the potential to be the biggest festival in Indiana eventually,” she said. “Our biggest hurdle is sponsorship. We are getting more vendors. The crowds are here but getting fans in from around the country is easier than getting people who can drive from the opposite side of Indianapolis.”•