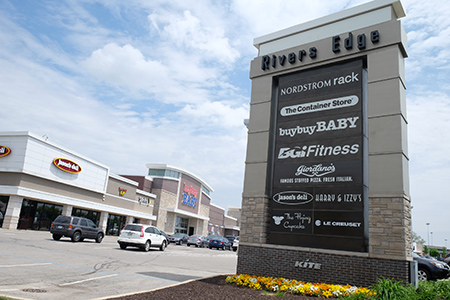 A company’s dividend yield—calculated by dividing its annual cash dividend by its stock price—zooms higher when its stock price slumps and/or its dividend payouts increase, both of which are the case for Indianapolis-based Kite.

Kite’s shares are off 83 percent from their 2007 peak in the months leading up to the Great Recession, and they’ve dropped 33 percent since July. Mall giant Simon Property Group, also based in Indianapolis, has taken its lumps, too, with its shares dropping 35 percent from the all-time high they hit in July 2016—a decline that left the company with a 4.9 percent dividend yield.

Both companies have continued to pump out solid quarterly results that suggest the sky-is-falling crowd is overreacting in fleeing the sector. Kite, for instance, reported that same-property profit rose 1.5 percent in the first quarter, compared with the first quarter a year earlier. The 102 properties used in that comparison were 94.6 percent leased at the end of the first quarter, down a hair from a year ago.

On top of all that, Kite’s small-shop leasing percentage, 90.5 percent, is the highest in the company’s history.

“We believe we are undervalued in relation to both our peer group and the underlying quality of our assets,” Bryan McCarthy, Kite’s senior vice president of marketing and communications, said in a written response to questions from IBJ.

“There is a wide disparity between the value of our stock and where we see properties similar to ours being valued in the private market,” McCarthy said, citing recent property sales by Kite and other firms.

Another Seeking Alpha columnist, Michael Boyd, opined that investors are wrongly lumping Kite, which owns open-air centers, with mall owners, which face the added challenge of replacing their ailing department store anchors with other kinds of tenants.

“Shopping center REITs have been sold off in tandem with mall-based players. Fundamentally, the two could not be any more different,” he wrote in a column earlier this year.

“The approach most mall REITs are taking to fix their issues—diversifying into new anchor tenants—is already how these REITs operate.”

Indeed, he wrote that just 18 percent of Kite’s rent comes from apparel—a segment that has been particularly hard hit by e-commerce.

He said Kite has “massive upside” and plenty of cash flow to make its dividend payments.

McCarthy acknowledged that “there is no question that the retail industry is in a period of necessary change. However, over 90% of all purchases are still made in physical retail stores, and we continue to consciously curate our portfolio with tenants and offerings that align with evolving consumer behavior.”

In a March investor presentation, Kite offered numbers to back that up. For example, it categorized just 7 percent of its tenant base as operating in sectors highly vulnerable to internet competition, such as electronics, books and office-supply stores. On the other hand, it deemed 54 percent of its tenant base as “internet resistant,” citing groceries, restaurants, service providers and entertainment businesses as examples.

Yet investors are staying on the sidelines—leaving Kite shares trading at a substantial discount to the overall market, as measured by price-to-earnings ratios. Because of that discount, the investment firm Hilliard Lyons last month reduced its target share price from $22 to $19.

In reiterating her “buy” recommendation, Hilliard Lyons analyst Carol Kemple wrote, “We like the fundamentals of the company.”

But for now, emotion rules the day. While that might be frustrating to management, it gives investors a chance to pocket an extremely juicy dividend, not to mention the potential for lots of upside if the stock recovers.•