Home » Tim Cook: Character should come first, even if it costs you 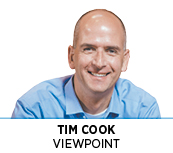 This Father’s Day is bittersweet for me. My dad died this spring. His name was Bob Cook. He was a great dad and great person. But this isn’t an article about his life. It’s about what his death taught me about business.

As I talked to people at his calling, whether someone who knew my dad personally or professionally, they always talked about his character, his compassion for others, and his unrelenting habit of doing the right thing, both in business and life. That’s not always my experience with the people I interact with professionally. Sometimes I encounter a specific personality in the business world, and I have to reconcile that person with the private one I know.

How often do we hide behind the “it’s not personal; it’s just business” myth? Or, we kid ourselves that what we do from 9 to 5 doesn’t reflect the person we show families and friends, or the pretense we portray at places of worship.

Thinking about people justifying their questionable behavior reminds me of the end of the movie “Chinatown." The bad guy, Noah Cross, is confronted over the worst action in his morally depraved life and responds, “Most people never have to face the fact that, at the right time and the right place, they’re capable of anything.”

Cross justifies his behavior as just a product of circumstances, but isn’t how we choose to act at a particular moment always a reflection of our character? Maybe we’re not always at our best or worst, but aren’t we always ourselves?

Make no mistake, my dad was not perfect in business or life. But he was intentional about how he acted in business decades before “intentional” became a buzzword. His intention was to be successful while staying true to his character, and he largely succeeded.

My dad’s business was real estate. For years, he and his business partner rented property to a farmer. Over time, my dad’s partner griped about why the fee never increased. My dad’s response: “What difference would it make in how much better we’d live our lives?”

Eventually, his partner had enough and drove them to meet the farmer. When they arrived, the farmer thanked them for renting him the property all those years and keeping the price the same, saying what a difference it had made to his family. My dad’s partner turned around and left. Later my dad asked him, “I thought you were going to bring up our fee?” His partner said, “What difference would it make in how much better we’d live our lives?”

This story is the epitome of my dad. When I think about his business persona, I remember someone who was financially successful but traded in greater wealth to preserve his character and humanity.

I contrast this memory to an observation of Jack Welch. Talking about his “Neutron Jack” moniker from his autobiography, a label used to describe his propensity for closing underperforming businesses, the former GE head reflected that, if he made a mistake in some of those mass-firing decisions, it was that sometimes he didn’t act quickly enough.

I don’t share that as judgment. My dad was a capitalist who took enormous pride in the business he built. But he never allowed his pursuit of the deal to jam his moral compass. And I know his epithet doesn’t read, “If only I had fired people more quickly, I could have been more successful.”

Reflecting on my dad’s death reinforced to me there’s not a piece of clothing called “character” that we can take on and off at a whim, fooling ourselves that our persona during the workday is different than our true selves. If personal and professional characters were part of a Venn diagram, my dad’s circles laid perfectly one on top of the other. It’s a business lesson he continues to teach me, even after he’s gone.•