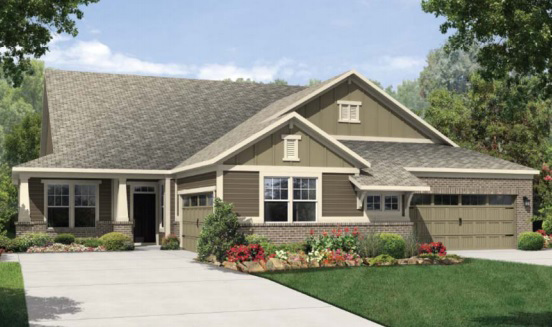 The developer has proposed building 84 paired villa homes (42 units in all) on 22 acres south of 151st Street and east of Towne Road.

The proposal was introduced at a Westfield City Council meeting this week, and it’s scheduled to go before the Westfield Advisory Plan Commission on July 2.

The community would be immediately west of the expanding Harmony subdivision by Estridge Homes. It would also be near CalAtlantic's Liberty Ridge subdivision, where homes start at about $300,000.

CalAtlantic has requested the city rezone the currently vacant land from the agricultural-single-family home 1 zoning designation to the single-family-attached classification.

The community would be known as Liberty Villas and would feature single-story duplexes. Documents filed with the city don't indicate how much the homes would sell for, and the developer could not be reached for comment.

The homes would be similar to CalAtlantic’s Chapel Villas in Noblesville, which start at about $230,000. The builder offers four different floor plans ranging in size from 1,597 square feet to 1,754 square feet.

CalAtlantic said in paperwork filed with the city that Liberty Villas would be targeted to empty nesters. Plans for the neighborhood include trails and a pond with a gazebo. Once built, the community’s home owners' association would establish a lot maintenance program for the neighborhood that would include lawn care and snow removal.

The area where the duplexes are proposed is exploding with residential development. The Harmony community has about 200 homes built now and another 500 are expected in the next few years. Estridge Homes has also filed plans to build a 125-home high-end subdivision north of 156th Street.