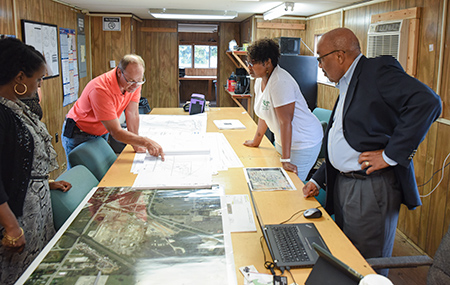 Building Indianapolis’ massive criminal justice center will be a bonanza for the companies that land the work—and minority-owned firms are angling to ensure they are among the beneficiaries.

If the city meets its goals, that would mean $154 million would go to minority-owned firms—27 percent of the $571 million project. The development, at the former Citizens Energy coke plant southeast of downtown, will include a jail, courthouse and mental health center.

Community advocates are hoping that, in addition to providing a boost for minority firms, the project gives a leg up to some Indianapolis residents who have been in the criminal justice system themselves and now want to build their lives in the construction trades.

“It would be a sort of poetic justice for citizens to get out of jail, having been trained in the jail, to then work on a justice-centered project,” said Antonio Lipscomb, who runs a new group aimed at advancing minority-owned construction businesses in Indianapolis called the Minority Contractors Collaboration.

However, the city is “aspiring to higher” for this project, said corporation counsel Andy Mallon.

“It’s been a priority from the beginning,” Mallon said. “It needs to be a community-based project and it needs to … reflect what the community looks like.”

The city is approaching construction from a “design-build” method, in which architects and contractors compete for jobs together, as a team. The system allows qualitative bid evaluation, rather than requiring the city to opt for the lowest bid.

Mallon said the city “is going to score the potential bidders to the jail and courthouse based on their commitment” to minority contracting, along with cost.

The city early this month is releasing an RFP for the jail. Six weeks later, it plans to release the RFP for the courthouse project. In both cases, evaluating bids will take 10 to 12 weeks. Mallon said he hopes to have design-build teams selected by the end of the year. 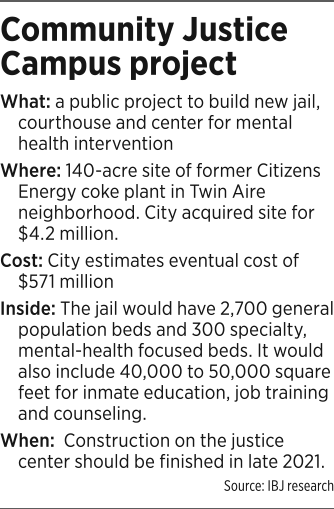 Two firms are already short-listed to build the jail and three to build the courthouse, based on results of a request for qualifications released at the end of last year.

The city is handling the two projects separately, partly to “allow greater participation between and among firms,” Mallon said.

“Our goal is to maximize the number of firms that get to participate in this project, especially local firms and especially [minority-owned] firms,” Mallon said.

A black-owned firm, Indianapolis-based Shrewsberry & Associates, is leading the city’s technical representative team. It is focused on maximizing minority participation, and not in a superficial way.

“People have tried to game the system before and we won’t allow that,” said President Bill Shrewsberry, a former Indianapolis deputy mayor. “We know what we’re doing. We’ve done this before and we know how to achieve and we’re getting started with the full encouragement of the administration.”

Shrewsberry & Associates’ contract is worth $1.5 million, which includes subcontractors.

The city also has hired Indianapolis-based Engaging Solutions to help with “matchmaking” to fill out each prime contractor’s slate of subcontractors, with an eye toward finding minority-owned firms.

Engaging Solutions, a black-owned and woman-owned firm, started working for the city in May 2017, receiving $3,750 per month. Now that the project is busier, the firm is receiving $7,500 monthly until December for double the staff time, according to the firm’s contract with the city.

Engaging Solutions Managing Principal Debbie Wilson said she previously has attended matchmaking events hosted by the city, and finds them an effective way to get minority-owned firms involved.

“It’s an opportunity to do a little bit of speed dating,” Wilson said. “It’s competitive. You’re trying to get on somebody’s team.”’

Shrewsberry and others trying to recruit minority contractors face a daunting obstacle: There just aren’t enough firms big enough to be prime contractors.

That’s something Shrewsberry hopes will change. He said building up experience on the justice center project could be a good resume-builder for small firms.

“We were a sub, but we got to the point where we can prime,” he said. “We’re priming jobs as a result of the growth and development [on smaller jobs].”

Camille Blunt, director of the city’s Office of Minority and Women Business Development, said “capacity is something we have heard is an issue” and “something we are constantly working on,” whether that’s by helping firms get tax documents in order or helping small businesses pair up to take on bigger jobs.

Blunt said minority-owned businesses should know they have to be certified with the city to qualify under the project. Another certification—such as one from the state—won’t work.

The process can take up to 90 days, but typically takes about 30 days. Companies also have to be based in Indiana.

So far, the city has 668 firms on its minority-contractor list. Most are racial-minority and women-owned firms, according to data provided to IBJ by the Mayor’s Office.

Larry Williams, president of the Indy Black Chamber of Commerce, said the minority business community is committed to holding the city and prime bidders accountable for aggressively pursuing minority contractors. 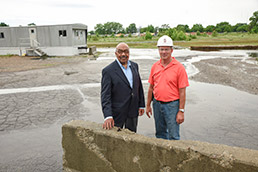 He said the city’s benchmarks are “attainable, definitely.”

“Right now, I’m satisfied with the way they’re doing the outreach,” Williams said. “We’ll be in their ear and be monitoring them while this whole project is going on.”

Lipscomb, who leads the Minority Contractors Collaboration, has higher ambitions than just lining up business opportunities for minority firms.

Lipscomb, through Love Life Industries, is working with soon-to-be-released offenders in Marion County Jail II to help them start careers in construction.

He said this work needs to be expanded upon—and the result could staff up and expand the capacity of minority-owned businesses.

“If we’re going to change the problem, we’ve got to give ex-offenders a chance to get on these jobs,” Lipscomb said.

City officials said they have similar goals. Separately, they're are working on beefing up re-entry services, including building spaces for job training inside the jail.

“It’s been an opportunity from the very beginning and we have absolutely tried to work that in,” Mallon said. “It’s not just with this project, but even going forward, building capacity to do job training and re-entry in the construction industry.”

Lipscomb’s newly formed Minority Contractors Collaboration hopes to step up advocacy for minority-owned businesses of all kinds in Indianapolis.

Historically, he said, leaders of businesses that have veteran, women, Hispanic, Latino or black owners have done their own advocacy work in their own silos, but they would have more impact if they worked together.

“We have to unite and come together, not only from a kumbaya position, but a strong political position, so we are holding our people who represent us accountable,” Lipscomb said.

“We’re mainly trying to craft a one-stop shop for minority businesses so we can erase all the excuses as to why we can’t be the prime on some of these jobs.”

The Rev. Ivan Hicks, senior minister of First Baptist Church North in Indianapolis, said the collaboration will push for higher minority-participation goals, including fines “where there is evidence of lethargy on the part of construction companies that win these big jobs.”•