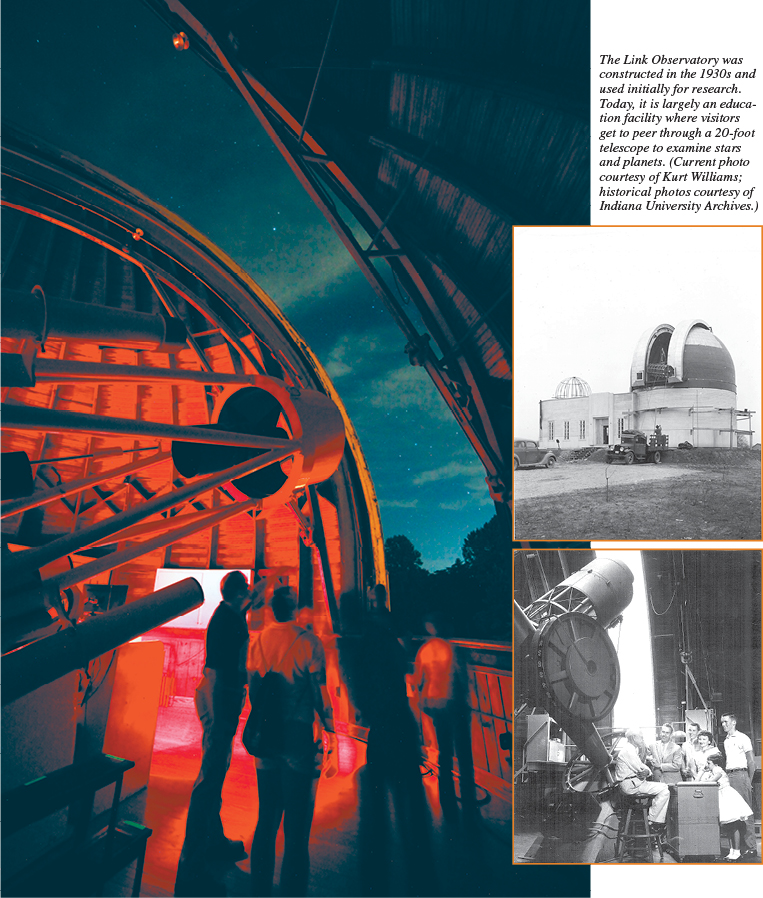 The interior of the Link Observatory Space Science Institute in rural Morgan County basks in the warm glow of incandescent lightbulbs as folks curious about the stars above gather to learn more about the universe.

John Shepherd, a senior astronomer and co-founder of the institute, leads a tour through the 79-year-old facility, including a conference room with shadowboxes that reflect photos of constellations, globular clusters and planets, freezing cosmic spectacles in time.

Shepherd acknowledges that most people have never heard of his work or of the Goethe Link Observatory’s storied history in the scientific community. But the primary goal of the organization now is education—and that’s just what’s happening here on this Saturday night.

Near dusk, guests are invited to gaze into the institute’s central feature—a 20-foot, 36-inch-diameter telescope, peering out from the campus’ central dome. Its white frame, dancing in the reflection of the red lights on the nearby stairs and walkway, is barely noticeable in the shadows of the oaken dome.

Outside, Mike Newberg, the observatory’s director of public engagement, helps children onto a stool to peer into his personal telescope while they wait to enter the main facility.

“Look, there’s Venus!” he shouts and points to the sky. Spectators flock around him and look out above a line of silhouetted trees. In the dim, gray wall of sky, a tiny red dot dazzles.

And it’s not only the children who benefit from the experience.

“It’s fun to learn things and do things without having to be tested on them,” Sandy Chenoweth, 69, said about her second visit to the observatory with her sister and brother-in-law, Libby and Dan Whipple. “You don’t have to write a paper, you get to hear all of these brilliant people talk about it, and you’re not held accountable later on. You just get to glean what you can.”

To reach the campus, guests must leave State Road 67 south of Mooresville and follow a winding road up a steep, wooded hill—one of the highest points in Morgan County.

A black iron gate marks the entrance, following a hard right turn. Beyond it, several faded, white-paneled buildings stand in a grove circled by trees. The bars spell out “Goethe Link” where the gate halves meet.

That name might not be familiar to many, but Goethe Link’s contributions to Indiana go beyond his interest in astronomy.

Link was a thyroid surgeon who practiced medicine until age 88. He and other medical partners founded Indiana University’s medical school in 1908. But his versatile interests—from hot-air balloon racing to herpetology—made him a true Renaissance man, observatory staff said.

In 1937, Link jumped into astronomy and piloted construction of the observatory that would eventually bear his name. He built a summer retreat for his family nearby as well as a private study where he could immerse himself in his work and the stars.

For years, the Goethe Link Observatory functioned exclusively as a research facility—serving as a leader in asteroid tracking in the 1950s and 1960s—but lights from neighboring Indianapolis, Martinsville and Bloomington eventually made quality research difficult. As a result, the facility discontinued research and closed under Indiana University’s care in 1988.

After technology—and interest—grew, the observatory reopened in 2012 with a focus on public engagement and education.

Chief Operations Officer Kurt Williams said Link exists to promote childhood interest in science and technology. The staff does so with funding from Indiana University and volunteers from the Indiana Astronomical Society.

“When you put your eye up to the universe, it’s like a time machine almost,” Newberg said. “There’s nothing else like it.”•